So here I am, now down to the final four! It is me, Dash of Pepper’s Dark Eldar, Tony Kopack’s Space Wolves, and Devon’s Grey Knights. I played Tony on Friday night at the invitational and I liked my chances against him. Dash is a wild card because he has a ton of shooting at strength 8 AP2, but I have shrouding that he can’t stop, and I can knock those paper airplanes out of the sky pretty easy. Objectives against him might be trouble in the primary.  Then there was Devon, I said that Grey Knights are my worse match-up and his army is a fast moving assault army just like the kind that I struggle against.
So when they announce the pairings, I get Devon and his Grey Knights. He played Xaereth in round #6 before and you should read his write up of his and Devon’s game because it gives some interesting context.

Devon is from Jacksonville and while I lived there for 6 months about 3 years ago I do not think we ever crossed paths. I spent most of my 40k time down in Orlando except for a tournament or two at War Dogs, so that might be why we never ran into each other.
My List
2000 Points of Grey Knights
HQ
Draigo
Librarian w/Warding Stave, Might of Titian, Quicksilver, Sanctuary, The Shrouding
Troops
10 Paladins w/4 Psycannons (1 Master Crafted), 2 Hammers, 4 Halberds (1 Master Crafted), 3 Swords (1 Master Crafted), Brotherhood Banner
6 Grey Knight Strike Squad w/1 Psycannon
Fast Attack
9 Grey Knight Interceptors w/2 Psycannons, Psybolt Ammunition
Justicar w/Master Crafted Demmonhammer
Heavy Support
Dreadnought w/2 Twin-Linked Autocannons, Psybolt Ammunition
Dreadnought w/2 Twin-Linked Autocannons, Psybolt Ammunition
Dreadnought w/2 Twin-Linked Autocannons, Psybolt Ammunition
So there it is…28 Models+ 3 Vehicles
Devon’s Grey Knight List
HQ
Librarian w/Warp Rift, Shrouding, Might of Titan, Quicksilver, Sanctuary, 3 Servo Skulls
Coteaz
Elite
Venerable Dreadnaught w/Multi-Melta, Heavy Flamer, Psyflame Ammunition.
Troops
Henchman Squad
·         6 Death Cult Assassins
·         5 Crusaders
·         Banisher
Henchman Squad
·         6 Death Cult Assassins
·         5 Crusaders
Henchman Squad
·         3 Warrior Acolytes w/Flamers
·         2 Warrior Acolytes
Razorback w/Psybolt Ammunition
Henchman Squad
·         3 Warrior Acolytes w/Melta Guns
·         2 Warrior Acolytes
Razorback w/Psybolt Ammunition
5-man Grey Knight Strike Squad w/Psycannon
Razorback w/Lascannon, TL Plasmagun
Fast Attack
Stormraven
Heavy Support
Dreadnaught w/2 Autocannons,Psybolt Ammo
Dreadnaught w/2 Autocannons,Psybolt Ammo
Land Raider Crusader
Pre-game thoughts
So looking at his army I know that he is going to come after me with his DCA and jump out of his Stormraven and Land Raider all the while trying to shoot up my dreads with his dreds. So my plan is to kill those 2 vehicles so he can’t assault me and then shoot down the DCA from a safe distance. If I can do that, it should be easy for me, if I can’t I will be in trouble. Also I have learned to hate Stormravens because those stupid mindstrike missiles will kill my librarian dead, and I need him to cast sanctuary to slow down those DCA in assault.

Mission:
Primary: Objectives
Secondary: Kill Points
Tertiary: Table Quarters
Well, this might be trouble because he has 5 troops, and speed. Also, his army is not very easy to get kill points off of. The good news is that it is an objective mission as the primary so if he does get aggressive with his henchmen, he will be the one in trouble because they are so fragile. Again my plan is to contest the objectives and beat him on Kill Points.
Deployment: Pitched Battle
Setup 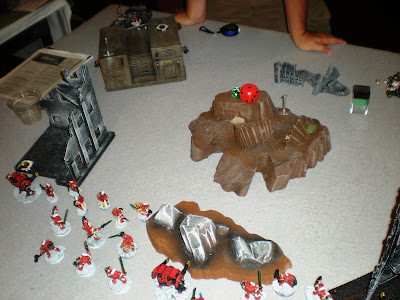 I win the dice roll to go first and I set up. I keep my Librarian in reserve so he does no get ganked by mindstrike missiles. I make the interceptors and 2 dreadnaughts scoring with grand strategy.

He sets up with his everything in reserve except his Land Raider with the librarian and DCA in it, and his 2 Psyfleman Dreds behind the building in the upper left. 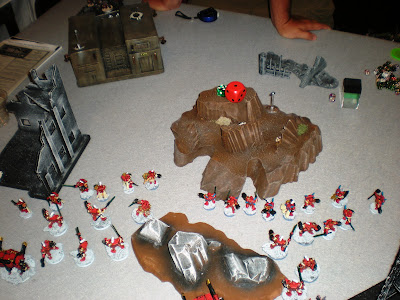 Devon's Grey Knight Turn #1
Me moves his Land Raider forward and he moves up his dreadnaughts. His shooting takes out one of my dreadnaughts. 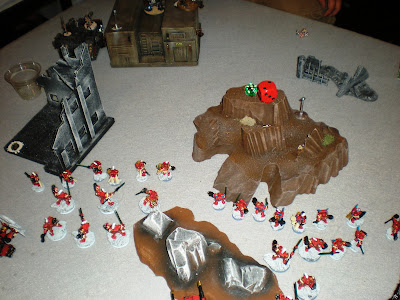 Turn #2
Blackmoor's Grey Knight Turn #2
So I have something to shoot at! I shoot at his Land Raider with my Paladins and I destroy it! Not only that, but his DCA squad is pinned. 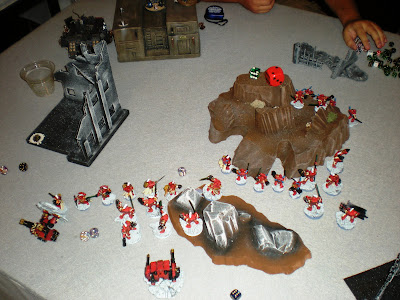 Devon's Grey Knight Turn #2
He gets his Stormraven and a couple of razorbacks on. I ended up making a huge mistake and I up a little too far forward. After his movement and disembark I was within charge range with my interceptors. Cortez and his DCAs come in and wipe them out. Also I was too close together and he ended up hitting a lot of guys with Mindstrike Missiles. Since they cause perils of the warp, he took out 4 of my Interceptors leaving me with one, and I lost a paladin and the rest took some wounds. Ouch! 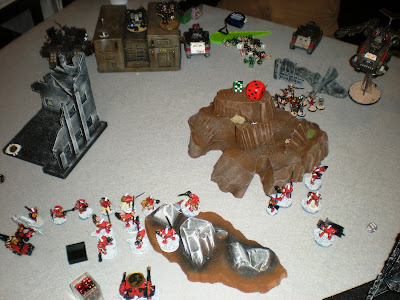 Turn #3
Blackmoor'sGrey Knight Turn #3
Well, I now have a DCA squad in the middle of the board threatening my entire army. So I can move away from it or I can try to take it out. I thought that I would be aggressive and hit them with my Paladin squad that is chewed up. They are bunched up so after a holocaust large blast, and psycannons shooting at them they should be able to hurt the DCAs with there crappy 5+ inv save right? Well after a great deal of saves by him I only killed a couple of them. I assault them and they start to beat down my Paladins. I had a chance to kill Coteaz, but I whiffed my attacks. The good news is that my Dreadnaughts take down his stormraven.

Here is a bad picture of the action. 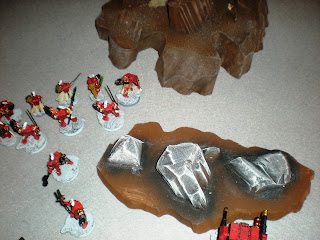 As a side note: I think I forgot about my librarian in the heat of the action, and he never makes an appearance, so I am fighting 200+ points down. When I put it like that, I don't feel bad about getting killed this game.

Devon's Grey Knight Turn #3
He finishes off my Paladins with his DCA. He is also shooting up my strike squad with his razorbacks.


Turn #4
Blackmoor'sGrey Knight Turn #4
When you need a job done, and you need it done right, you need to call in the Draigo. Draigo and his band of merry men assault the DCA squad and go to work on them. My dreadnaughts take out his venerable dreadnaught (whew!)


Devon's Grey Knight Turn #4
Draigo and his boys clear out the DCA and croak Coteaz and consolidate. He finished off my strike squad, At this point I am not doing well, and you can always tell when I am losing because I stop taking pictures and have to concentrate on the game at hand. He still has a lot of scoring units and I am in trouble.


Turn #5
Blackmoor's Grey Knight Turn #5
I shoot and take out one of his Dreadnaughts with psycannon fire. At this point I hope he leaves his dreadnaught there. I want to go after it with  Draigo with a 6" move, and a 6" assault move then with Draigo taking it out, he can get a consolidate move of up to 6" and contest the objective in his back left. That is how you can move fast with a slow moving army. If your opponent is in the wrong place, you can use it to spring board off of them to get a lot of movement. 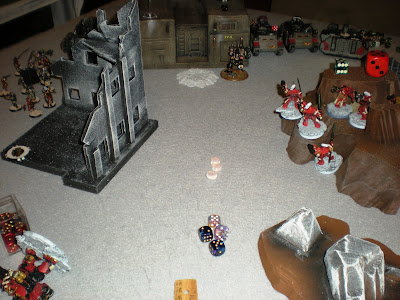 Devon's Grey Knight Turn #5
He moves his dreadnaught closer and assaults me. I end up killing it, but he also runs a razorback up to contest the objective.

He moves his DCAs to the objective on the lower left. He has a henchman squad in the upper left behind the building that I can't get too, and in the upper right he has his strike squad. He contests the center and I hold the lower right with a dreadnaught.

If the game ends here I lose, 3-1 objectives but it goes on!


Turn #6
Blackmoor's Grey Knight Turn #6
I kill his razorback that is contesting and I shoot at his strike squad in the back right killing a couple.


Devon's Grey Knight Turn #6
He runs another razorback at me, and contested the center. Some time around here I lost Draigo to shooting since I wanted to preserve my scoring units.

If the game ends here, I again loose 3 objectives to 1
The games goes on!


Turn #7
Blackmoor's Grey Knight Turn #7
I need to clear the center objective, and clear one of his. My dreadnaught shoots and kill his razorback contesting the center. That frees up the paladin squad to shoot at his strike squad and he fails 3 out of 4 saves and I wipe them out.


Devon's Grey Knight Turn #7
He tries to run a henchman squad on to the objective on the upper right, but fails to get to it. 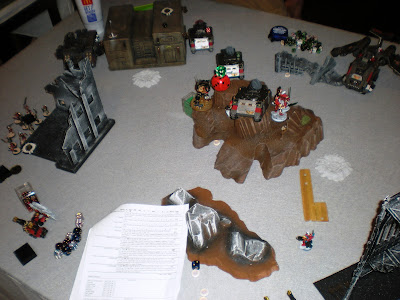 Primary: Objectives
I hold the Center and the lower Right
He holds the lower Left and the upper Left
Result: Tie

Blackmoor wins!!! (I guess you knew that since I played Tony Kopack for the win).

This was by far the hardest match-up of the tournament. Grey Knights are a hard army to fight, and I made the mistake of getting to close to his table edge to give him the first turn charge. I also did not realize that I forgot my Librarian. I only keep him in reserve when I am playing against Stormravens (like I did in game #3) but it looks like I forgot all about him in the heat of battle.

This is the game that I thought I got really lucky to win and I should have lost. As Xaereth wrote in his batrep, I did to Devon what he did to him the game before.
Posted by Blackmoor at 12:13 AM