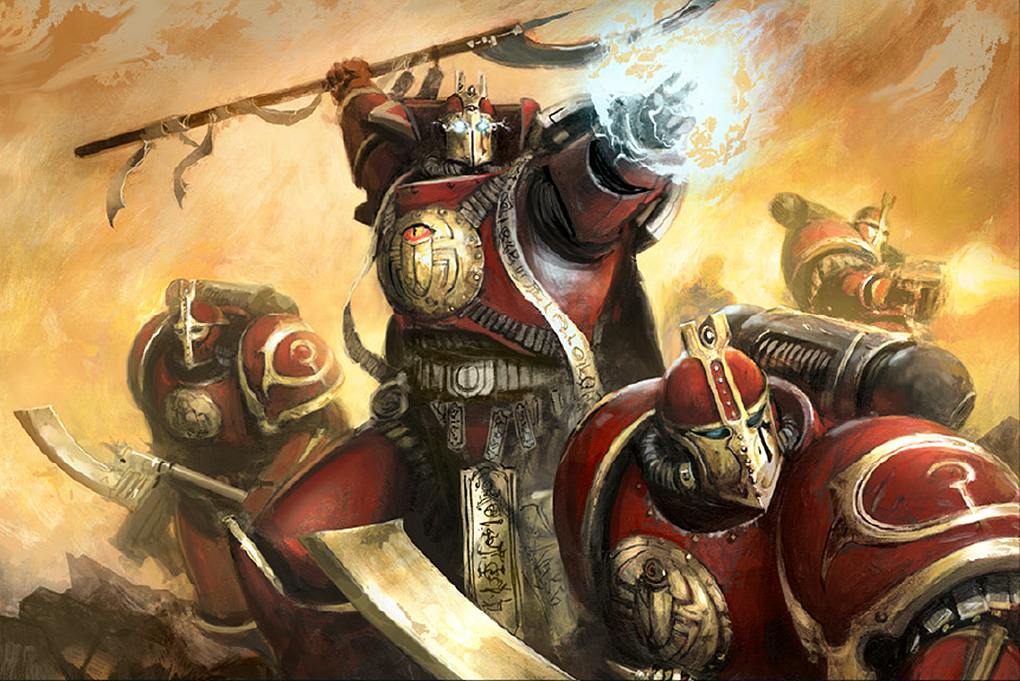 I am a Thousand Sons player and I look at everything from that perspective and I am not seeing too much in the new codex that is speaking to me. It is still early on and we have not seen everything that they codex has to offer but the dribbles that we have seen does not look promising.

Right now it seems like the codex is filled with demonic engines which might make the Iron Warriors happy, but not the Thousand Sons players.

Thousand Sons
The cost for them is 150 points for 5 Thousand Sons Marines including the Aspiring Sorcerer and then they are going to be 23 points each with stays the same. The only difference is that they pay 35 points instead of the 70 points for the aspiring sorcerer that made them so expensive in the 4th edition codex.

If you have the Mark of Tzeentch you have to take at least one roll on the Tzeentch power table. I thought one of the things that made the TS aspiring sorcerer not very viable was that they could only take one power. If they could have taken warptime for assault and a shooting power to add to the squad they would have been much better. If they still get only one roll (and it has to be on Tzeentch) then they are not going to be that great. I hope that they are at least mastery level 2.

Primaris Power: Tzeentch’s Firestorm
First off, I always hate blasts. They are so inaccurate and if your opponent spaces out you will get about 2 models if you hit at best, but you have a 66% chance to miss.

Then let’s take a look at the sequence you have to go through to kill a model.

After all of that it seems like you have better chance to kill yourself from Perils of the Warp than kill your opponent.

1-2 Boon of Mutation
A friendly character takes a strength 4 hit for a roll on the Chaos Boon table. Well, a regular SM character will die on a 16%. That is not so great since you are paying a lot of points for them, and they are generally critical. Even with ICs who are more able to take a S4 shot the Boon table is not that great.  Then who knows what you will get and most of them are not even worth it.

5-6 Breath of Chaos
The new Winds of Chaos.

So overall they are just ok powers, maybe a bit below average. The other powers that they can take are Biomancy, Pyromancy, and Telepathy.

Pyromancy might be the weakest discipline. Biomancy is good if you are an assault character but Thousand Sons armies are not assault based. Telepathy is ok.

Other Tzeentch Wargear
Icon of Flames: Mark of Tzeentch Only: Boltguns, Heavy Boltguns and Bolt Pistols have the Soul Blaze
Really…soul blaze?

Special Rules
Mark of Tzeentch: Invulnerable Saves improved by 1 It was only good last edition because you get to cast and extra psychic power. +1 Inv save sucks.
Demon of Tzeentch: Hatred (Demons of Nurgle), May Reroll all saves of 1. This one is a little bit better.
Psyker: May chose psychic powers from pyromancy, biomancy or telepathy. Tzeentch he must chose at least 1 psycic power from the appendant discipline. See above. Not that good.

Ahriman
For 230 points let’s take a look at his rules.

Warlord trait:
Master of Deception: (1d3 units can infiltrate). At first I thought this trait was bad, but since TS Marines have such a short range that this might be useful. It might also be good if you have cultists.

Special Rules
Champion of Chaos: Has to give and receive challenges. Isn’t Arhiman a bit old for that foolishness?
Independent Character
Mark of Tzeentch: +1 Inv save for a total of 4+ Inv. Standard for ICs.
Psycher Level 4:  The best in the game so far and able to cast 3 witchfire powers. The problems are that he is unlikely to get 3 witchfire powers, and his powers are not that great (see above)
Veteran of the Long War: Hatred Space Marines (but not Space Wolves?)

Posted by Blackmoor at 4:08 PM