I had been planning on taking my Tyranids to the 'Ard Boyz but I was unable to get the big bugs and bone swords necessary to get the army together, so it was on to plan B.

So it is back to my old standby of Foot Eldar. I almost switched to Chaos the night before (and maybe I should have) but at that point it was too late.

I am playing at Empire Games in Mesa. Since there are only 4 stores running the tournament in Arizona, and the other stores are smaller, a lot of the overflow came there to play so they had 20+ players.

So on to the games!

I have played against Mundar a couple of times before, and so for, he is one of the best players in AZ that I have found. There might be others that are better, but I have not played them. So going into this game I knew this will be trouble.

Well, that sure is a lot of jump troops.

Set up: We had 3 objectives in one deployment zone, and 2 in the other.

He wins the dice roll to go first, and chooses the deployment zone with the 3 objectives, leaving me the one with 2.

He starts with everything on the board except for his vanguard squads. He is dispersed through cover so everything gets a cover save.

I start in my standard deployment with everything around my avatar, and the warp spiders and the jet bikes off to the sides. 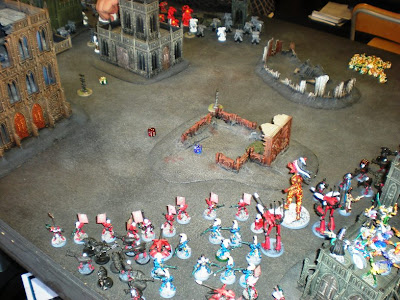 When he gets a turn, he does not advance and hunkers down. I shoot a few shoots and he goes to ground. Outside of the Dark Reapers, I really do not have much long range shooting.

The game is basically a standoff with both of us over 18" apart. He does not want to get close to get shredded with my short range shooting, and I do not want to get into charge range.

So in round #2 he gets his Vanguard squad on and goes after my right side Warp Spider squad and takes them out, and in my turn the harlequins take them out. 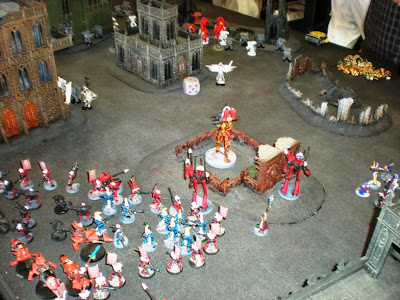 In turn #3 the second Vanguard squad goes after my jetbikes, but deviates out of range and hits my dark reapers. They take them out, and my Harlequins drift back to take them out as well. He pushes Dante and the Sangunary High Guard forward and they get shot to pieces. He ends up with Dante with 2 wounds left after the shooting match is over.

Dante then assaults one of my jet bike squads, but he only kills 2. I counter assault with a squad of guardians (they were the only thing in range) and Dante whiffs, and with doom the guardian were only able to do one wound to Dante. In the next round Dante kills the jet bikes and the guardians kill Dante.

Then in round #5 one of us make a move and it is him. He charges me with everything except on squad and we end up in a huge scrum. In the end the dust settles after round #6 and this is what is left: 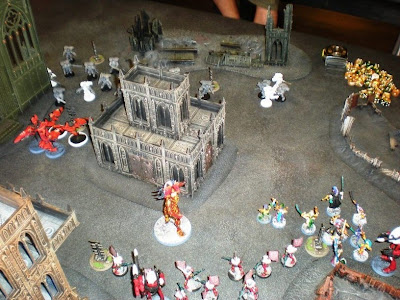 A close up of his objectives 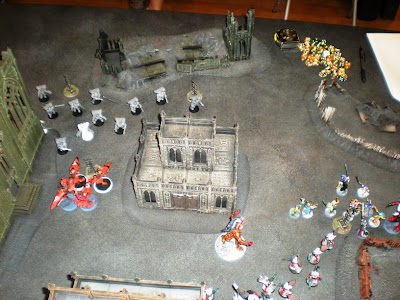 He has one squad on three objectives and the Jet Bikes contesting one.

This feels like a list out of 3rd edition. It looks like the old space wolf rhino rush army with the special characters thrown in to bring it up to 2500 points.

I win the dice roll to go first, and I never know what to do with it. I want to keep them as far away as possible and yet want them close enough to do some damage. Whenever I lose the dice roll, they drive forward, drop smoke, and then are on me on turn #2.

So I took the first turn and started blasting away at his rhinos. I immobilize 2, and severely cripple his rush. Then on his turn he moves his first rhino and breaks down in terrain, and then he stops the advance and turtles up. Uh oh…that is not what I wanted to happen. Now I have to do after him and dig him out of his corner.


I start to advance and slowly kill his rhinos. He has a couple of options at this point, he can either move back and try to conserve his units, or he can run everything at me as fast as he can and try to overwhelm my shooting. He chooses option #3, and that is whenever I kill a rhino, he runs that squad at me and I shoot it down. So after 6 turns he has a dreadnought and half of the Wolf Guard squad.


Here is just a look at what I have left at the end of the game. 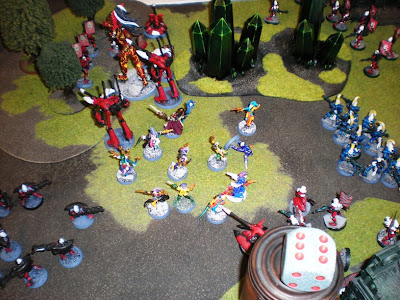 Well, I am thinking that I need to get another massacre to qualify for the semi-finals, so I need to pull out a big win.

Mission: This is the now-famous kill point mission where fast movers are worth 3 kill points each.

So let me get this right, for me to get a massacre I have to kill 7 more kill points than he has killed of mine? Piece of cake ;) My opponent said before the game that it will be really hard for me to win. I told him that it will be easy (ok, so I can be a bit of a jerk. That explains why I get bad sports scores at tournaments).

A note about the board: The board was covered with giant buildings that did not have any window to shot though. It was really and assault armies dream.

My opponent sets up with just his non-genestealer units in the very center of the table. This is standard for outflanking armies because they will hit the sides, and everything ends up moving to the middle where the heavy hitters, can get to them.

I deploy in my standard anti-tyranid/outflanker set-up and squish my army in from 18" from either side of the table. I also keep my jetbikes, and my dire avengers in reserve so they can react to where the outflankers come on and wipe them out.


After I set up he then infiltrate his whole army. For some reason that did not occur to me that he would do that and it took me a bit off guard. He ends up with one genestealer unit to the left, 2 units in the center, and 3 on the right.

Well, this is not good. So use Eldrad's re-deploy ability to move everything out of the right flank and move it to the left. My strategy is to kill the genestealers on the left, then kill the ones in the center, and then do a fighting retreat to take care of the ones on the right.

I try to wipe out his Genestealers on the left but do to some great cover saves he has a few still left. I took Dark Reapers in 4th edition to combat Godzilla nids, and they are still work like a charm because my shooting takes out the 3 tyrant guard. (We had a big rules issue here. He had the tyrant and the guard behind them and wanted a cover save because most of the unit was obscured by the Tyrant).


Then he keeps advancing. His CC Carnifexs are rolling 6s to run, but his genestealers on the right are rolling bad for difficult terrain and his run rolls. His Ymgarls come on, but he tries to bight off more than he can chew (so to speak) when he goes after several units and does not do much damage, and I was able to kill some and I only lost combat by 3 and the wounds from being fearless don't kill much.

I get a jetbike squad and my dire avengers and they help to take out the Genestealers on the center that are dangerously close, and the Avatar takes out the Ymgarls. Harlequins take out the CC Carnifexes and start to go through his army.


I start to run out of room and hits my Dark Reapers that were stuck because of shooting get taken out. I also lose a guardian squad.

This opens them up to the flamers of the Wraithlords and then assault. Shooting take a huge toll on them as well as an angry Avatar. The harlequins take out the shooting carnifexes. 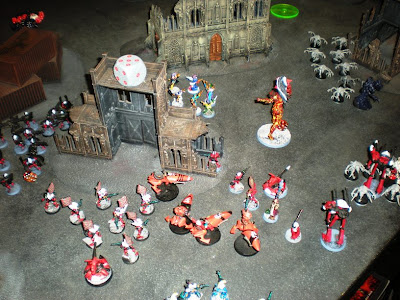 Note all of the terrain

He assaults my Avatar and loses and gets run down, and then everyone piles in to help out the wraithlord and that was all she wrote. 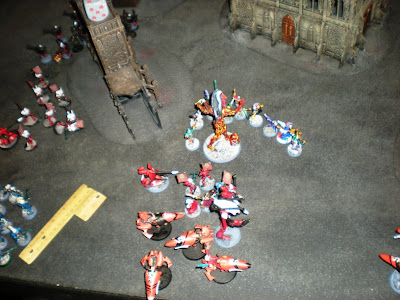 I lost a 2 guardian squads, and my dark reapers

He lost his army.

Wrap UP
I ended the tournament with 59 battle points with 2 Massacres and 1 Draw. I also scored the most VP in the tournament and killed 6500 points.

In a lot of stores that would have been good enough for a win, but not in mine I and ended up in 5th place.

Posted by Blackmoor at 4:09 PM