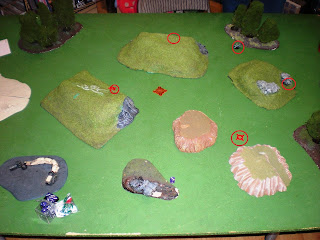 Deployment
He wins the dice roll to go first and sets up. He has his devastator marines in the forest on back, his Terminators in the middle, and his assault marines on either side. 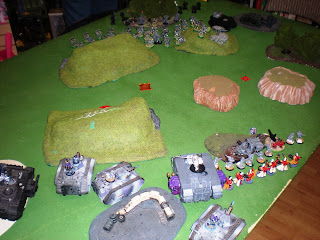 I hide the Chimeras and try to keep them 48" away from the missile launchers. I have the Land Raiders out in the front, and since I can't put the Storm Troopers in the Land Raider, I put them in a Chimera, and put an IG squad in the rubble to the right, and a Grey Knight squad behind them.

Turn #1
I seize the initiative and go first!!!

Demonhunter Turn #1
I start blasting! I want to kill his terminators because I think I can handle his assault marines, but they are hard to kill with a 2+/3++ and Feel No Pain. 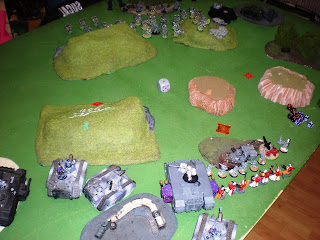 Blood Angels Turn #1
He moves forward and shoots his missile launchers at my Grey Knights and kills one. His second volley gets stopped by shrouding. He then starts in on my poor IG and kills 2 of them. 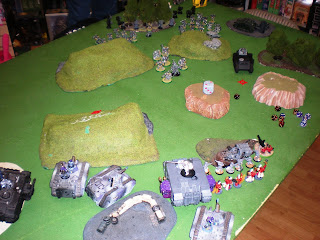 Turn #2
Demonhunter Turn #2
He seems like he is in no hurry to get to me, so I move out. I try to get into position to get some objectives. My shooting kills 2 Terminators! 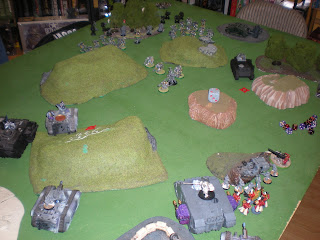 Blood Angel Turn #2
He moves forward. On the left he tries to get his melta guns in range to kill my Land Raider, but he is out of 6". He assaults my Chimera with his terminators and since it moved fast he only knocked off the Multi-laser. 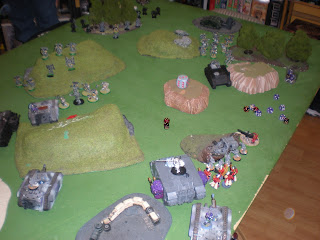 Turn #3
Demonhunter Turn #3
Alright, time to get to work. I shoot and kill his Razorback killing one marine and pinning the rest.
I unload all my shooting on his Assault Marines and his Terminators and then I assault. The power armored GK do a great job and mop up the Assault Marines. On the other hand my Terminators whiff and I get my butt kicked, but I do manage to force weapon the Reclusiarch. It does not look good. 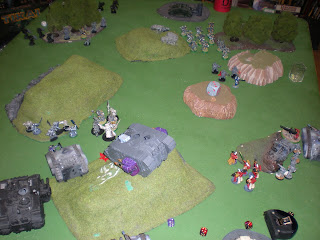 Blood Angels Turn #3
His shooting starts to hurt my right flank. He hurts my Grey Knights, and he shoots my IG squad off the table. My Grandmaster kills his Priest and then I made all of my invulnerable saves on my terminators and I stay locked in (these are the last saves thy will make all tournament). 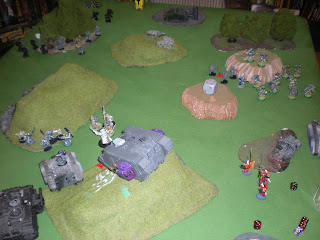 Turn #4
Demonhunter Turn #4
He is down to 2 troops, so I need to start to take them out. I move to get into position to take them down. My GKs jump into the Land Raider and I start shooting to take out the 4 Marines that were left when the Razorback blew up and kill them. Everything else goes against the Assault Marines. In assault I kill one of his terminators and the other one runs. 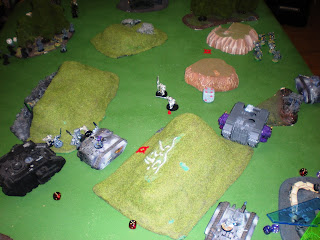 Blood Angels Turn #4
He is running out of units and he shoots and kills my terminators with his Assault Marines. They are in the middle of the board and can still be trouble. 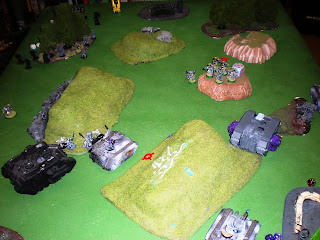 Turn #5
Demonhunters Turn #5
I have to move out at this point and claim the objectives. I shoot and kill his last Terminator. I unload everyone on the Assault Marines and do not kill as many as I would like. 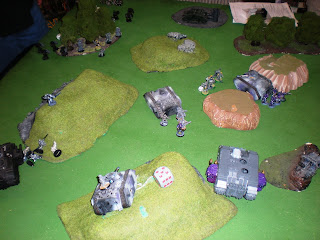 Blood Angels Turn #5
He tried to shoot my GKs off the objective on the left but does not kill them all. He has 3 Marines left and splits up. The assault marine goes back and sits on an objective. His Reclusiarch goes after my Platoon Leader and he kills 3, but they stay. The Priest goes after my Storm Troopers and he kills 3 of them, but they kill him back. 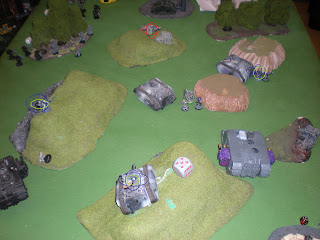 And then the game ends.It was a close game, and if my Storm Troopers did not kill the Priest it would have been a minor win for me, but as it was I held 2 more objectives than him for a major victory. I nominated as my HQ to kill his Assault Reculsiarch, and I killed just about everything but him, so I missed out on the 3 bonus points.