The state of foot eldar and an e-mail question 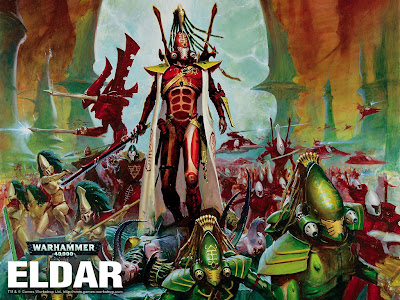 E-mail in!
Hey, I heard from people that you are a foot eldar expert and I am just starting to play 40k but running foot eldar because it looked more fun.

I was going with the eml/lance on lords and SLs on the walkers and the 4 gaurdian squads with 2 spiritseer conceals.

Two things, because I notice you are in the LA area, What would you recommend I change up/get and second would you be up for a game ever?

-Michael
Well, I was a foot eldar expert, and I hope that my eldar are going to be making a return soon.
So let’s break down what you have:
Eldrad + Avatar
I like this set up for foot eldar if you are Guardian or Dire Avenger based. The Avatar is not only there to provide the army with fearlessness, but he is a great counter assault unit. Eldrad is also good because you can use his re-deploy ability, and you need his 3 powers to greatly increase the effectiveness of your army. Guide, Doom and Fortune will be the powers that you use to be force multipliers in a foot eldar army.

Harlies x11 (inc. shadow seer/Jester)
Scorpions x9 (inc Exarch)
Let’s talk about these units together because they have a similar role. As a foot eldar army you need something to use as a counter assault unit, and nothing is better than Harlequins. Scorpions (and Banshees) can be shot at range, while your Harlequins are nice and safe behind your line using Veil of Tears to hide. Also they are so fast (ignoring terrain, Fleet of Foot) that they can get to the front lines in a hurry to get where they are needed to hit your opponent’s assault units. Scorpions have a lot of trouble getting into assault even when they are running around in a wave serpent. They have a good armor save, and I like them better in assaults than Banshees because of their flexibility to be able to counter both horde and MEQs (with the scorpions claw), but they really are very poor performers in a foot list.
Guardians x40 ish

2x Warlocks
Back in the day, I ran round with 3 squads of 10 guardians armed with Bright Lances. With the increase in venom spam Dark Eldar and Grey Knights with their storm bolters both of those armies can put out a lot of shots at range. So to compensate for this I wanted to make my guardian squads bigger so along with conceal and fortune they might be able to take some firepower. I would arm them with scatter lasers these days so the amount of shots makes up for their bad BS, and they can take down light transports.
2x Wraithlords
You need some anti-tank and this is why you need Wraithlords. You need to give them a brightlance and eldar missile launcher. I also like the fact that they have flamers for hordes that get to close, and also they are another source of counter assault. You can also run them with one shooting weapon and the sword if you are light in counter assault, and have enough anti-tank.
3x War Walkers
This is a great unit. I use to take 3 squads of them, but I just need some more anti-tank and added wraithlords but I still took one squadron of them because this unit is so good.
Now let’s talk some foot Eldar
The collective thinking on Eldar is that they are specialist units, and they only do one thing, and they do it well. The surprising thing about Foot Eldar is that almost all of their units are very well rounded and can fill a lot of different roles.
For example:
Wraithlords have anti-tank, decent at assault, and flamers for hordes.
Jetbikes have a Warlock with a Singing Spear for anti-tank, Destructor for anti-horde, a Shriken cannon for anti-light vehicles, and catapults for infantry.
Guardians with a heavy weapon have anti-tank and anti-infantry.
Avatars are good at everything, and have a melta gun just in case.
Harlequins are a very good assault unit and can have melta pistols and a death jester.
Dark Reapers can have a missile launcher so they can mow down MEQs and shoot vehicles.
War Walkers have scatter lasers that are good at killing light vehicles and infantry of all kinds.
You get the idea…
I would like to say that I fear that my build of foot eldar might be obsolete. As I stated above the Guardian build might be on its way out (not that it was ever really here since I was one of the few people that used it) because of the torrent of fire builds that are common now. I might switch them out with Dire Avengers because of the 4+ save and with fortune makes them a bit more durable, but psycannons will still mow you down out in the open.
That is why the successful foot eldar armies are now built around Wraithguard.
The rise of the wraithguard
Adam “Mortovie ” Gotti took his all the way to the ‘Ard Boyz finals on the west coast a couple of months ago. Then there is Greg Sparks who also does well with his wraithguard based build as well. He did well at the ETC last year (also from this article he confounded the guy who was writing up what units were present at the ETC because his army is unlike any other).
The wraithguard build is good because of a lot of reasons.
#1. If you take 10 of them they count as troops.
#2. They are fearless as well as anything attached to them.
#3. They have short range shooting, but their gun has very unique properties.
#4. They are one of the most durable units in the game. Toughness 6 and a 3+ save are hard to get through. You add a warlock with conceal, and a farseer with fortune and hurting the unit is difficult.
Add HQ to flavor. You have to run a farseer (read that as Eldrad) in a foot eldar list, and you can hide him in a wraithguard unit to protect it and him. Then some players add Yriel or the more common Murgan Ra to the squad to give it much needed protection from assault. Murgan Ra hidden in the squad also gives it the added bonus to give the unit some very good ranged firepower.
Then when they are assaulted (which is their greatest threat) then you hit them with your harlequins that were hiding behind the unit. Greg Sparks likes Wraithlords in the role, but I prefer to send in the clowns.
Also another unit that is underrated is Warp Spiders. This is a very fast unit that has a ton of strength 6 shooting. The warp jump that they get to use in their own assault phase is very useful. It is nice to see a unit run in the shooting phase and then be able to move to within 6" of it to make sure it keeps on running.
Here is a video batrep of the wraithguard footdar in action that Reece made. He has been a fan and a proponent of the footdar for a while and he has taken a lot of flack for it (like we all have) because most people do not get it until you lose to it.
Posted by Blackmoor at 11:33 PM