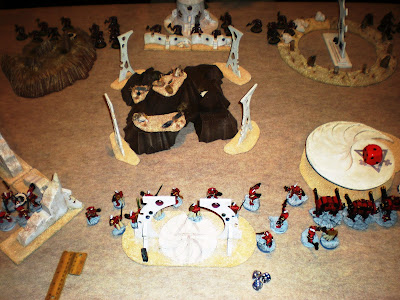 He starts with 2 squads to the left, 2 to the right, and his command squad in the middle. His land speeder is back to the left and his bikes are outflanking.
Draigo and 5 Paladins on the left, Strikes in the middle, and Paladins and Librarian and then the Dreadnaught.
Turn #1
Deathwing Turn #1
He shuffles forward and shoots me up. He kills 4 strikes and immobilizes one of my dreadnaughts. Funny thing is that I thought that the terrain that my dreads where behind blocked LOS. Looking at it from the top down it looks solid, but it was actually pretty hollow and he was able to get some shots at them.
Grey Knight Turn #1
I shuffle forward and I kill a couple of terminators. My dreadnaughts shoot down his land speeder. 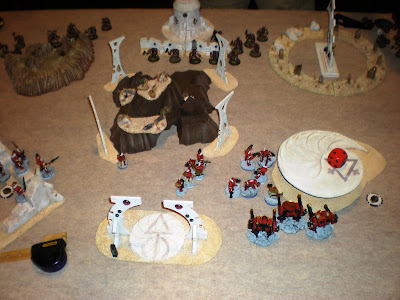 Turn #2
Deathwing Turn #2
He gets his bikes on the left side and shoots at my Paladins doing a wound (this will be important later). His shooting kills Dreadnaught and couple of Strikes.

Grey Knight Turn #2
My turn I shoot up his terminators again. He is down to a 4-man squad and a 2-man squad on the left. I split off Draigo and he goes after the bikes. One thing about Draigo is that he is like an extra squad. He can kill just about any unit by himself. 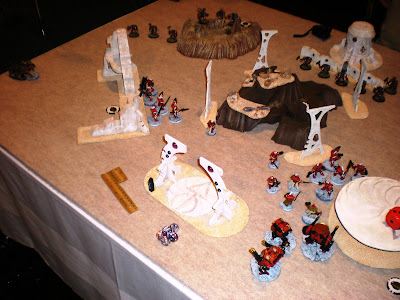 Turn #3
Deathwing Turn #3
He gets his attack bike on and comes after my dreadnaught and stuns it. He tries to assault my Paladins on the left gets only the 2-man squad in and the other one failed to reach do to difficult terrain. My paladins do enough wounds that I was able to kill them. Draigo finishes the bikes and tries to hook up with his paladin squad. 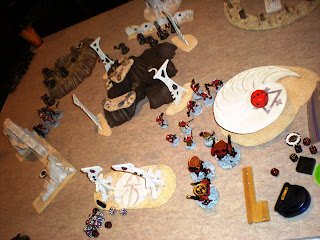 Grey Knights Turn #3
My dreadnaughts turn and try to finish off that attack bike, but he makes all of his saves and refuses to die. Shoot the squad on the left with my Paladins and kill one from shooting getting him down to 3 terminators. Then I charge them. Draigo was still straggling behind from him killing the bike squad so he does not make it in to assault. They are the squad with the banner though and the get 4 attacks on the charge each and I end up doing a ton of wounds (3+ to hit, 2+ to wound) and he makes all of his saves but 1. Uh-oh. He attacks back and hits me and does one wound. So I have a choice: I can put it on the Paladin with one wound (but he has a psycannon and I do not want to lose it) so I put it on a guy with a sword for the 4+ inv save and I fail it. Since it is strength 8 I lose the model and I lost combat by 1. I roll my leadership check and I roll an 11. That is not good, and I break and fall back. 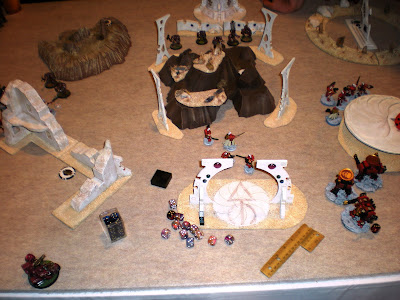 Turn #4
Deathwing Turn #4
He is following me to keep my paladins from re-grouping. 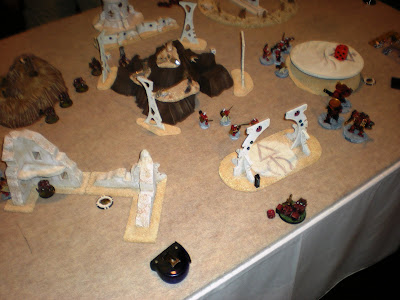 Grey Knights Turn #4
Alright, it is official...I am losing. Instead of sweeping the left side and crushing him, I am now in disarray. It is not all that bad because I am falling back toward and objective so that is good. I just need to kill these guys that are following me. So I unload on them and do a ton of wounds and one dies. Just in case I am unable to kill them, I move my other squad out to take his objective on the top right. 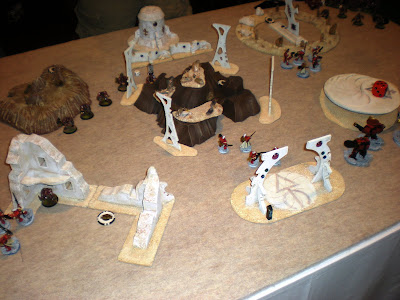 Turn #5
Deathwing Turn #5
He strings out his command squad so he holds the upper left and the center objective. He moves his smaller squad to hold the objective on the upper right, and moves his last squad to back them up.
Grey Knight Turn #5
Well, this is not going well. I move my strike squad up so they contest the center objective. I shoot my Paladins on the right at his squad holding the objective and take them all out. I shoot my Dreads at the command squad and kill one (that means that next turn they can only hold one objective), and I shoot at the last terminator that is keeping Draigo running and I unload 8 psycannon shots and 3 storm bolters at him and do all kinds of wounds and he does not roll a '1'.
We roll to see if the game ends and it goes on.
Turn #6
Deathwing Turn #6
He charges my strikes with Beilal and kills them. He charges his last squad at my Paladins and Librarian and takes them out when I can't make a save.
Grey Knight Turn #6
Draigo runs off the board (I wish I could say that the is the first time this has happened, but it happens all of often) and I really have nothing left at this point.
The game ends here with him holding 2 objectives and me with none.

Well, I thought this game was well in hand, and going well. He was on the ropes and I was rolling him back. One bad morale roll and I lost.  He made all kinds of saves this game, and I could not kill those terminators that were keeping me running.