Because Timmah asked for it...
So I am now 2-1 and working my way up and for my next game I ended up playing Timmah’s Space Wolves. Timmah had just beat Stelek and so he was very animated. In my game it was like playing someone who just chugged down 4 red bulls.
For some additional reading, here is Timmah's battle report of our game.
For my battle report, keep reading... 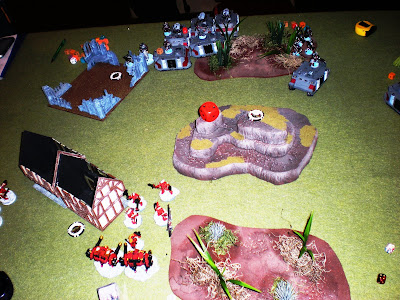 Grey Knight Turn #2
I get my strike squad on and  go after his Scout Squad. I shoot at them and only kill a couple. My plan is to have the librarian and his squad go after the center objective, and Draigo and his boys going after the objective on his side of the table, and my dreads hold the back left objective, and the Strikes the objective on my right. There are less rhinos than there were before. 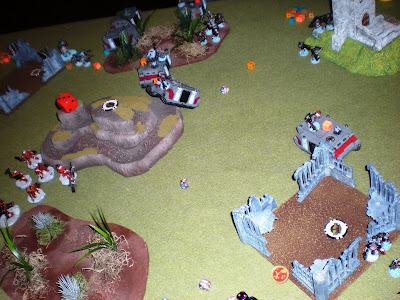 Turn #3
Space Wolf Turn #3
His scouts shoot up my strike squad and kill a couple of guys through shooting, and then they assault them. That is right, 4 scouts assaulting a Grey Knight strike squad. Well I roll like I always do and only kill a couple, and his powerfist from his wolf guard kills several and I lose combat and my strike squad runs off of the board. This was an unpleasant turn of events.
Grey Knight Turn #3
I keep advancing and shooting. 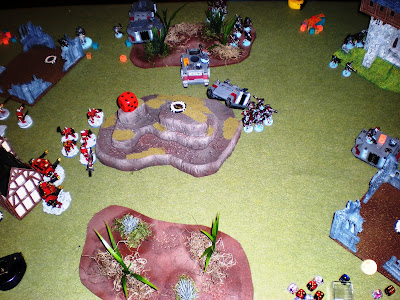 Turn #4
Space Wolf Turn #4
He moves around to try to stop the inevitability of his loss. He tried to put himself into position to get the objectives, but he is afraid of my paladins, and keeps a healthy distance. 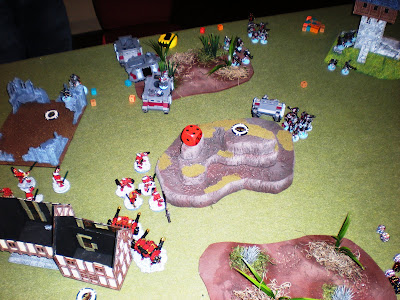 Grey Knight Turn #4
Turn #5 is coming up so I have to make sure that I am in range of the objectives so I move up to make sure I am in striking distance.See all of the dice in his side of the table? The represent exploded vehicles. 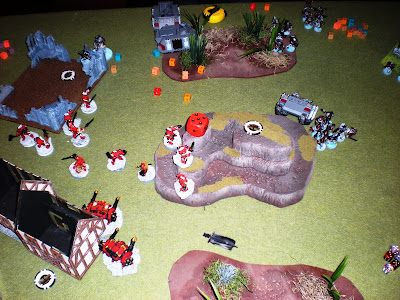 Turn #5
Space Wolf Turn #5
He tries to hold the objectives. He shoots the Librarian squad up and kills a couple of them.
Grey Knight Turn #5
I move my dreadnaught back behind the building so it can't be shot (if I was winning the game against Tony K I would have done the same to my scoring units so he could not kill them, but I was losing so I left them out there). I engage the units that are trying to hold the objectives and power armored marines are no match for paladins. 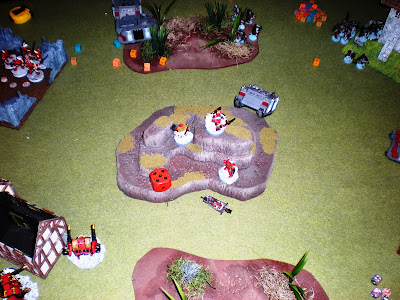 Turn #6
The game goes on one more turn and he tried to shoot me off the objective but I still have a scoring unit on top of the hill.

At the end I have more objectives and I win the game.

The funny thing is that Stelek is saying on his blog that grey knights can't compete because they lack melta weaponry to deal with vehicles. He does not realize just how much strength 7 and 8 shooting that Grey Knights can throw down range. In our game I hid for all of it because I could not get half of my army on so I was never able to show him what it can do. I would have liked to see him play one of the 5 dreadnaught armies that were all over the 4-0 bracket on day #2 and see how he would have done, but he did not make it up there with all the hard armies.

I on the other hand was at the top of the heap and I had to fight my way through 3 grey knight armies.


I find it odd that he says that they need melta to compete, but 4 out of the 16 armies that went 4-0 on day one were Grey Knights, and the one loss he took was to them :) It looks like the lack of melta did not hurt Grey Knight players much.
So here is an example of what my army doing what his army with all of it's melta guns could not, and that is beat Timmah.
Posted by Blackmoor at 9:54 PM