Game #3 Vs Chris’s Tyranids
So after my win and tie I get to face Chris and his Tyranids.
His list (From memory)
HQ
Swarmlord
3 Tyrant Guard


Elite
2 Hive Guard
2 Hive Guard
Troops
16 Termagants
16 Termagants
16 Termagants
Tervagon
Tervagon
Tervagon
Fast Attack
20 Gargoyles
Heavy Support
Trygon
Deployment Zone: Spearhead Deployment
Mission: Seize Ground (3 Objectives)
One objective is placed in the middle of the table, and each player places one objective in the quadrant to the left and the right of their deployment zone, at least 12” from another objective, and 6” from a board edge.
If a player controls all of the objectives then they score 17 points and their opponent scores 3.
If you control more of the objectives then you score 13 points and your opponent scores  7
If you control the same then you go to VPs. If you have 200 more VPs then you score 11 points and your
I win the dice roll to go first again and set up (3 times in a row, who needs the Emperor’s Tarot?)
Deployment
There is a ton of LOS blocking terrain and I have to stack up to fit into my deployment zone. I know that I and a lot of other people complain about not having enough LOS blocking terrain, but there is a fine line between not having enough terrain, and having too much terrain. 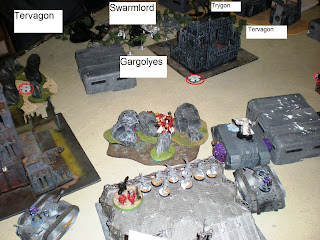 He sets up across from me, and keeps one Tervigon in reserve.
Turn #1
Demonhunter Turn #1
For target priority I need to kill the Gargoyles that can be on me very fast and locking me up in assault, and the closer the Swarmlord gets to dying the better. Because of the terrain I can't get my whole army to shoot at him, but my shooting does a few wounds to the Gargoyles. 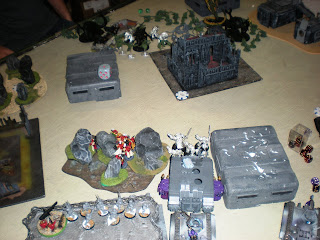 Tyranid Turn #1
He moves forward and spawns gants. He drops FNP on the Swarmlord and the Gargoyles. His shooting is ineffective (with one notable exception, his shooting does nothing the whole game). 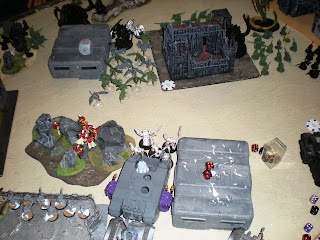 Turn #2
Demonhunter Turn #2
He is too close and the Gargoyles have to go. I embark my Terminators in the Land Raider and move out. That lets me move up my Chimera with the Platoon Leader and he 4 Flamers and the disembark and they BBQ them. Even with FNP I kill most of them to be finished off with the GKs shooting. On the right side of the table I try to multi-assault the Tervigon and Gants with the GKs, and I end up rolling poorly on my assault move and fail to get to the Tervigon. If I could have gotten to him I could have killed it with no-retreat wounds, and then if it dies it would have exploded, and it would have taken out a lot of gants around it, but it did not happen. :(  So I started to butcher gants. 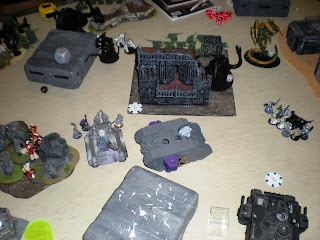 Tyranid Turn #2
He gets his Tervigon from reserve, and now has 3 of them crapping out gants, and he still does not roll any doubles. He assaults my Platoon Leader with his Swarmlord like I had planed on, and he dies. The Trygon goes after my GKs and kills a bunch of them. 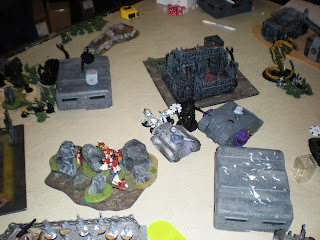 Turn #3
Demonhunter Turn #3
I am tempted to go after the Swarmlord with the GKs, and the Terminators, but he put FNP on them so I thought that I would take care of them later. In hindsight, the FNP only impacts the GKs, and has little effect on the terminators, but I am not sure I will win that fight anyways. So the GKs jump in the Chimera, and everyone else runs! So I have the terminators go after the Trygon to secure that flank. The GM does some wounds to him, but I fail my roll to force-weapon him because of Shadow in the Warp. Then on his return strike, he kills 3 terminatorsm but he does die to the other attacks though. 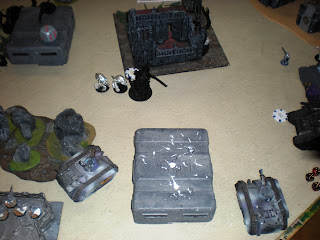 Tyranid Turn #3
Finally he rolls a couple of doubles after 3 turns and a sea of gants! He assaults my Chimera with his Swarmlord and kills it. 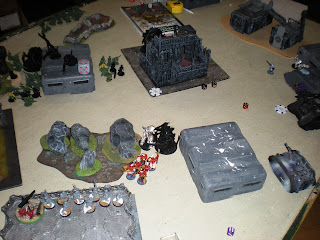 Turn #4
Demonhunter Turn #4
So here we are at the middle of the game and I have one objective, he as another, so it looks like the fight is over the center. So to hold the center I need to kill the Swarmlord. I unload every thing I have into it, and I do 2 wounds to him, and kill 2 tyrant guard. Not as good as I had hoped. (I learned my lesson from last game and do not charge him and leave the cover). 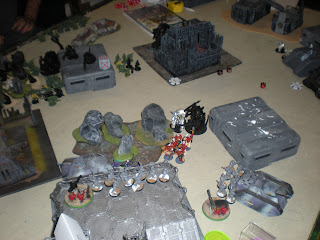 Tyranid Turn #4
He shoots his hive guard at my Terminators and does 2 wounds. Of course that means that I roll 2 "1"s for my saves and they both die. I second guess myself over not putting them in the Land Raider, but I needed the 2 Psycannons to shoot the Swarmlord, and I have a 2+ save and he as no AP2 weapons so I think I did the right move by leaving them out there, I just got very unlucky. His Swarmlord moves forward and kills the GK squad. That darn thing is unstoppable! 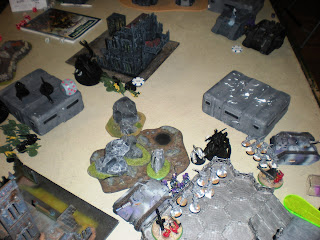 Turn #5
Demonhunter Turn #5
Run for your lives! Everyone scatters from the Swarmlord. The Justicar in the Land Raider will try to hold or at least contest the center objective. I shoot and kill his Tervigon around the center objective taking some gants with him. I manage to kill his last Tyrant Guard. As a note, there are 2 Hive Guard and a bunch of Gants on the other side of the building from the center Land Raider. 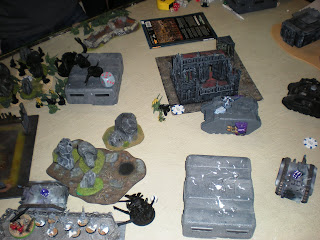 Tyranid Turn #5
He moves the Swarmlord to go after the Land Raider, but it moved 12" and he does not hurt it. 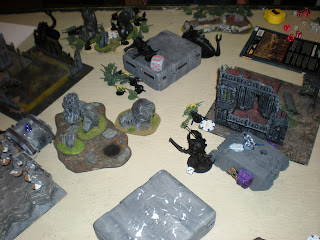 Turn #6
Demonhunter Turn #6
I again unload everything on the Swarmlord and do it's last 2 wounds. I now start to shoot at the Gants to try to get rid of them. 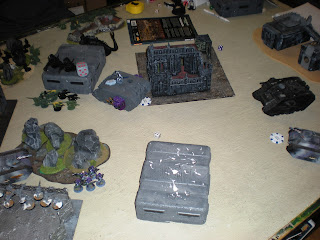 Tyranid Turn #6
He moves up to try to contest the center objective to try to tie the game. He attacks my Land Raider with his Tervigon but fails to hurt it. 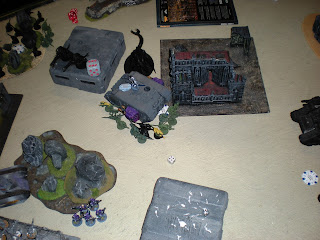 Turn #7
Demonhunter Turn #7
I play to win games and not tie, so I try to do something to win the game that has a very bad chance at succeeding. I have the Justicar go after a handful of Gants, and the Stormtroopers go after some gants and I end up getting my butt kicked. I also forgot to move my Land Raider this turn so now he his me automatically. 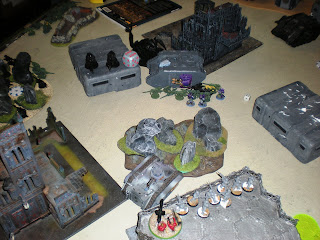 Tyranid Turn #7
He tries to kill my Land Raider and fails (Whew!) That could have been the game for him. 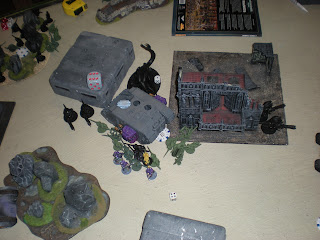 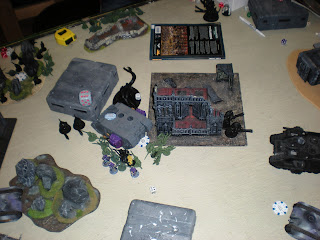 We ended up calling it a tie. We killed about the same number of Victory Points, but we had no idea how many spawned gants that I killed. That might have put me over the top, but I had tied in my last game so I did not care enough to figure it out.

There were a few things that I could have done. I could have use both Land Raiders to keep him off of the objective giving me the game. I could have gone after his Swarmlord when I could have brought everything to bear on if, but I didn't. Who knows how that would have turned out, and if I ended up losing that combat it could have been crippling/devastating.

I need to pay attention to the mission packet more especially in tournaments that are win/loss. I could have conserved VPs with my Justicar and my Stormtroopers because at that point is was pretty much going to be a tie, and I could have easily gotten the minor win.


Overall I ended up going 1-0-2 for the tournament and finished in the middle of the pack. For some reason the had as tie being scored as being worse than a minor loss. I wonder if they scored it 10 points for a tie like they should have if those 4 points would have moved me up in the standings.

Overall I had 3 great games and I did succeeded in what I wanted to do was to get experience with the army, and find out what the weaknesses were.  I have already made some radical changes.

Here is the results from Rankings HQ:

Posted by Blackmoor at 4:46 PM