Fast Attack
Land Speeder Typhoon
Heavy Support
Vindicator
Mission: Capture and Control
Deployment: Pitched Battle
Setup
I win the dice roll to go first!
I set up for most of my stuff in cover. I am going to have my strike squad hang back on my objective while my terminators and my Purifiers will try to take his objective. 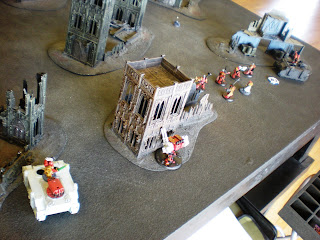 He hides as much as he can, and places his terminators in reserve. His EC is in the rhino on the far right. I forgot that he had a vindicator when I placed my terminators and that could be a lot of trouble. 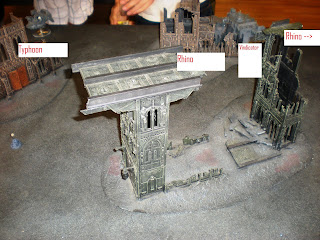 Turn #1
Grey Knight Turn #1
I move my left razorback farther to the left and shoot his Typhoon stunning it. My dreadnought shoots at the vindicator and I get 1 penetrate and 2 glances on it to get 2 weapon destroyed and an immobilized to kill it. (whew!) 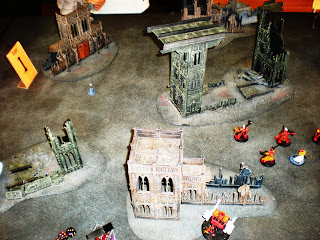 Black Templar Turn #1
He doesn't do much. I might have hurt him too much because now he might try to defend his objective instead of trying to come for mine. 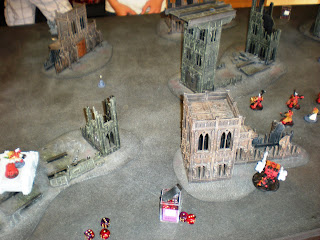 Turn #2
Grey Knight Turn #2
I try to move my razorback on the left and get immobilized by the ruin. It does shoot and takes off 2 weapons from the typhoon. My dreadnaught shoots at his rhino on the far right and immobilizes it. The terminators shoot at his other rhino and kills it. 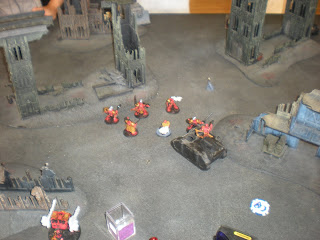 Black Templar Turn #2
He gets his terminators on and moves forward. He rolls a '6' and fixes his rhino. 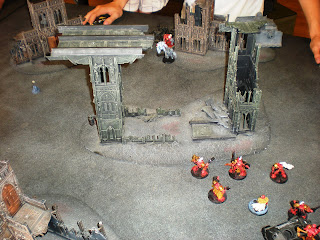 Turn #3
Grey Knight Turn #3
I unload on his terminators and kill one of them. I re-immobilize his rhino. 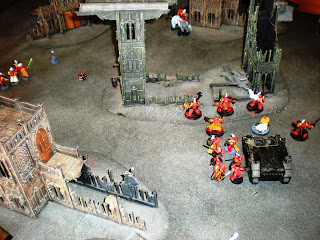 Black Templar Turn #3
He rammed my razorback with his landspeeder and ended up killing each other. 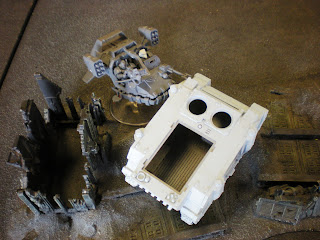 His terminators were coming after mine. They are looking for something to kill, and I am right in front of him. I cast sanctuary to try to slow him down, and it doesn't and he gets into assault. Lucky for me I am in cover and get to go first. After Hammerhand and Might of Titian I do 6 wounds and he makes all of his saves except one lightning claw terminator. (This is how bad all of my first rounds of combat goes. And people wonder why I do not run assault armies). He wants none of my librarian with his 2+ save and he strikes back at the unit and  kills 3 of my terminators (so much for a 4+ save) and my Demonhammer kills one back at him, but I make my leadership check. 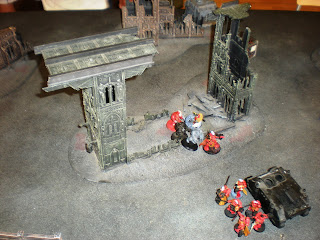 Turn #4
Grey Knight Turn #4
I roll a "12" when I try for Quicksilver and take a wound due to PoTW. I also get a Might of Titian and a Hammerhand and the Justicar goes first with his master crafted halbred anyways and he takes a lightnig claw out before he dies.
(No Picture)
Black Templar Turn #4
He moves his squad out of cover and shoots up my Purifiers. My Librarian kills another terminator (This staff is coming in handy). 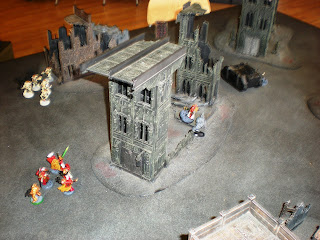 Turn #5
Grey Knight Turn #5
My Librarian rolls a "2" for quicksilver but I make both saves (whew) and kills the last terminator. My purifiers hit his marines as tear them a new one. 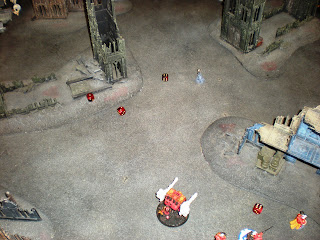 Black Templar Turn #5
My razorback gets a little to close and he assaults it with his last squad and kills it. 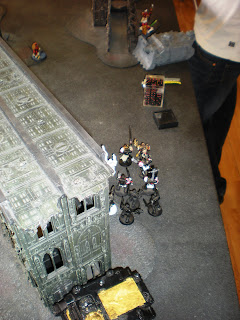 The game ends and I have my strike squad on my objective and my purifiers on his (but they are not scoring not that it matters) and i win 1 objective to 0.
Posted by Blackmoor at 1:18 AM