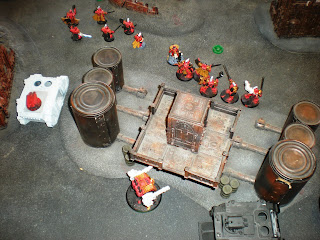 He places his Vendetta in reserve and here is the rest of his set up his setup: 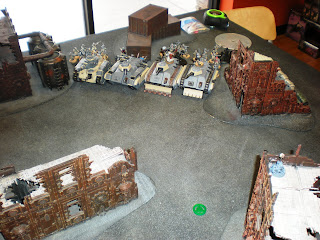 Turn #1
Grey Knight Turn #1
I scoot forward and all of my shooting immobilizes the Chimera on the right, and stuns another one. 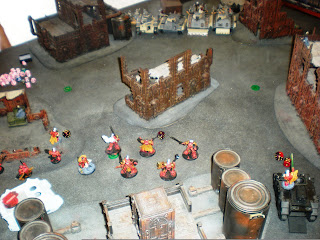 Imperial Guard Turn #1
He moves forward and unloads on me. He kills my razorback on the right and then starts to kill my Purifiers and kills 3 of them when I can't make a save. The Leman Russ shoots at my Strike Squad and I cast shrouding and they make all of their saves. 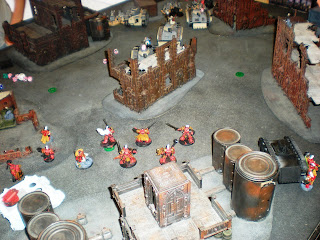 Turn #2
Grey Knight Turn #2
The Purifiers run for their lives and hide. I move my psycannons up and they get up penetrating hit on the Leman Russ but only stun it. The Dreadnought kills the Chimera with the psycher battle squad. 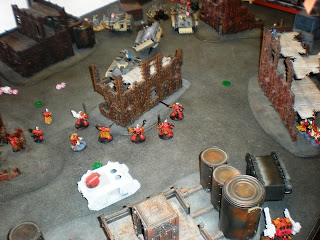 Imperial Guard Turn #2
He gets his Vendetta on in the lower left and takes a shot at the dreadnought and does nothing. He shots and kills one terminator (with shrouding) with his melta gun command squad after they get out of the lead chimera. 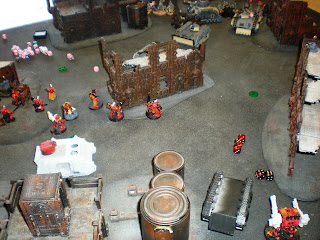 Turn #3
Grey Knight Turn #3
I need to kill the Vendetta, but he backed up the Leman Russ so the dreadnought can get side shots on it. So I move my Terminators so that they Psycannons can hit the Vendetta and they end up only knocking out one lascannon. My shots on the Lemon Russ do nothing from the dreadnought, and my Grey Knight squad kills his command squad.
(No Picture do to thinking)
Imperial Guard Turn #3
He knocks a gun off my dreadnought, and his shooting also kills a Grey Knight. 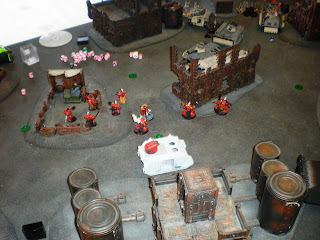 Turn #4
Grey Knight Turn #4
My dreadnought immobilizes his Vendetta. I shoot up his psycher battle squad and kill 4 of them but they stay. 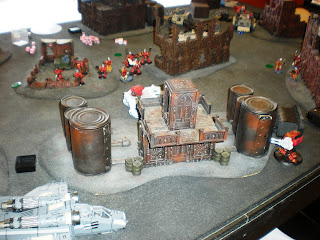 Imperial Guard Turn #4
He veteran squad gets out of his Vendetta and tried to come after my terminators.
(No picture)
Turn #5
Grey Knight Turn #5
I move so that I am all over the objectives, and trying to stop him form getting to them. I shot the crap out of the lead Chimera and I could not kill it. I shoot at the veterans and the fail their morale roll and run.
(No picture)
Imperial Guard Turn #5
All his shooting kills my Razorback, and 1 terminator and I roll a "12" for morale and I fall back 4".
(No picture)
Turn #6
Grey Knight Turn #6
That chimera is still alive so when my terminators fall back 4" I was still withing 6" of the chimera and I had to fall back 5" more. I wish they could have run a little faster or I could have been out of 6" and I could have rallied. My Purifiers assault the chimera and auto hit it and I can't roll a "6" to penetrate it after hammerhand.
(No picture)
Imperial Guard Turn #6
With my terminators running, his psycher battle squad is now out of 24" of my psychic hood and he is able to do some casualties to my Grey knight squad and he is able to weaken their resolve (I was able to block it all game long) and the Justicar fails his morale roll and runs. 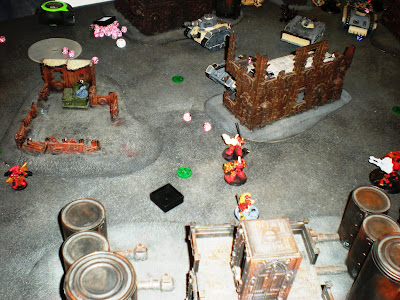 End game:
We both have 0 Objectives.

He was able to shoot me off of them, and we ended up tying.

I went 2-0-1 and was in a 4 way tie for first and using VPs for tie breakers I was 3rd place. My 3rd round opponent ended up with 2nd place with a near tabling of me.
Posted by Blackmoor at 11:41 PM