While I am sitting around waiting for bases to dry I thought I would write some about the Bay Area Open. I have so many GTs this month that I can't write them all up, so I will so some quick postings.
Here is my list in case you forgot:
1850 Points of Grey Knights
HQ
Draigo
Librarian w/Warding Stave, Might of Titian, Quicksilver, Sanctuary, The Shrouding
Troops
10 Paladins w/4 Psycannons (3 Master Crafted), 2 Hammers, 4 Halberds (1 Master Crafted), 3 Swords (1 Master Crafted), Brotherhood Banner
10 Grey Knight Strike Squad w/2 Psycannons, Psybolt Ammunition
Fast Attack
9 Grey Knight Interceptors w/2 Psycannons, Psybolt Ammunition
Justicar w/Master Crafted Demmonhammer
Heavy Support
Dreadnought w/2 Twin-Linked Autocannons, Psybolt Ammunition
So there it is. 32 Models+ 1 Vehicle
The odd thing is that my first 3 games where all against guys named Josh.
Games #1 vs. Speed Freak Orks (Josh J. 63rd Place)
Here he is getting ready to call the Waaagh!!! and assault my Paladins. 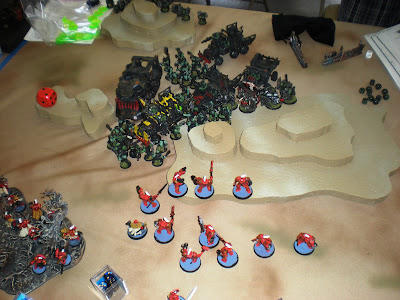 This is what he is left with after the assault. 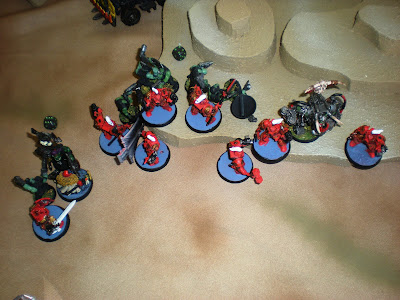 And then they all run except for the Ghazkull who makes about 18 no-retreat saves and will last just one more turn. 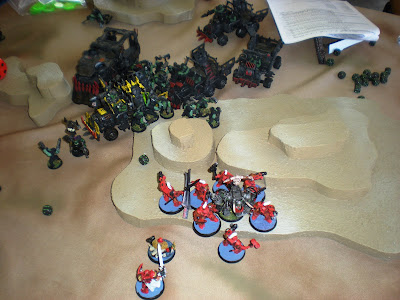 After that it was just a mopping up action. 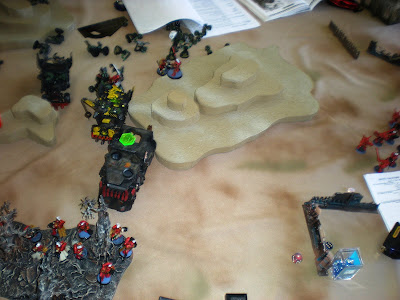 Funny thing is that the Strike Squad on the lower left was tank-shocked by a Trukk and they failed their morale and ran off of the board. I see that my dice are still giving me some problems, but it was an annihilation mission and everything was well in hand at that point.
Game #2 vs. Crowe Grey Knights, Dual Dreadknight  (Josh S. 8th Place)
Josh made a mistake and this is all he had guarding his objective in Command and Control 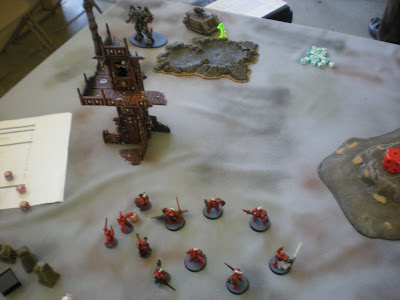 Draigo and 5 of his boys made quick work of his Purifiers, Crowe and the razorback. 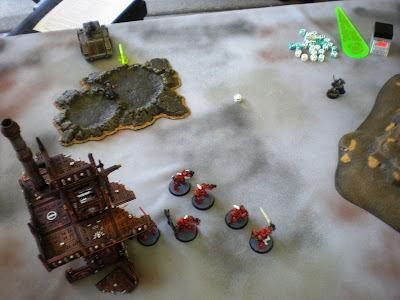 I knew all I had to do was kill his forward units and he would not be able to get to my objective in time. I did that, but he was running as fast as he could while his dreadknight was going through my army. The game ended on turn #6 with him just being outside of my objective. 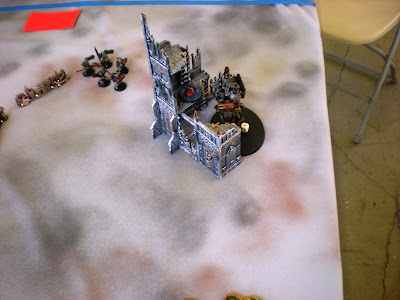 Josh ended up on table #1 in the last round and ended up losing to the tournament winner.
Another funny thing is that I bought new blue dice because my other dice roll so bad. So his first shots are a psyfleman dred at my Paladins and he rolls 3 wounds. So I roll my saves and this is what I got: 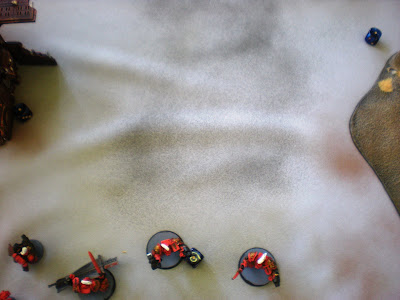 You will see 3 blue dice on the table all on the '1' dropping three paladins on the first salvo. Oh, dice how I hate you!
Game #3 vs.  Mech Blood Angels (Josh B. 15th Place)
Seize ground is a tough mission for me, but Josh #3 skimped on the troops and I was able to win a slug fest. This is the end of turn #7. 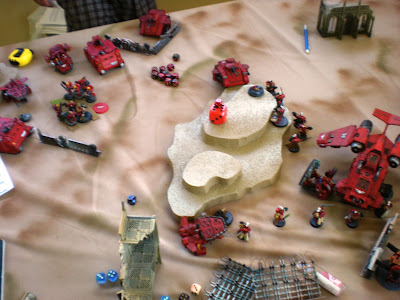 Here is the problem when playing capture and control...you do too well early on and your opponent will just retreat and turtle up on their objective. Here is a pic of the start of the game: 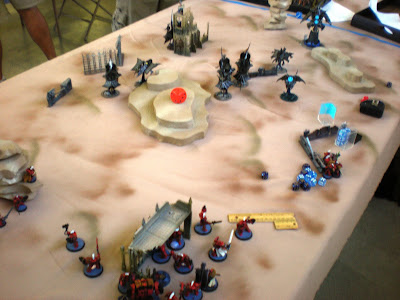 Here he is on turn #3 with most of his skimmers wrecked: 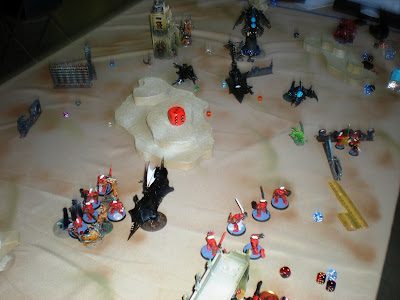 Now here he is with all of his skimmers downed, and almost all of his infantry killed. All he has left is Vect, some Grotesques, and 2 small squads of Wracks for his troops holding his objective which is in that building in the back center. At this point he says that it is obvious that it is a tie, and that we should stop and check out the other armies, and relax. You can not see it very well, but I have my interceptor squad on the upper right corner. All I have to do is blow his 2 Wrack squads away and he is going to lose. So I tell him to let's keep playing and see what will happen.
So after every turn I kill more Wracks and he tells me that it is going to be a tie.
Here is turn #6 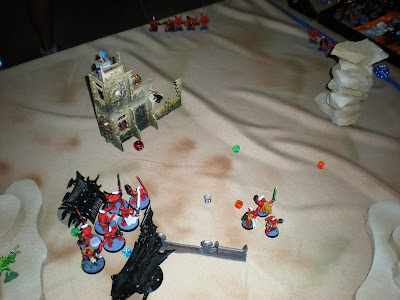 I could not get close enough to contest his objective. He had it on the top floor and I could not jump anywhere and not be within 1". So I just shot the heck out of him and he made a ton of saves. He went to ground, and had feel no pain and he just would not roll low. At the end of the game he had one Wrack left (those stupid things never failed a morale roll). He said at the end "See, I told you it would be a tie." Grrrr, he got really lucky to squeak that tie out.

So I think I am not going to adopt that move. Whenever I can't win a capture and control mission, and I might loose it I will try to talk my opponent into calling it a tie and quitting early.
Oh well, I was 3-0-1 on the day and it was on to 3 games on day #2!
Posted by Blackmoor at 12:24 AM