Nova Open game #2: Blackmoor vs. Stelek!
There have been a lot of rumors about what happened in our game, and up until this point only 2 people really knew what happened. So here is what happened:

Grey Knights
Draigo vs. his entire army! That is how much of a bad ass he is. 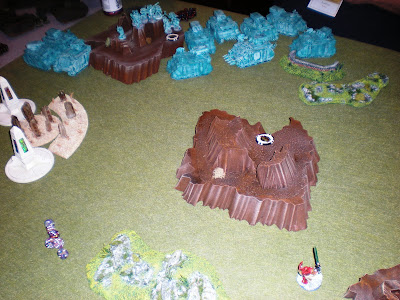 Well, I am not going to stand around and get shot of the board for 6 rounds from a shooty army of death. It is never a good idea to play into your opponents’ plan and do what he wants you to. I thought that I would go into reserves since my whole army can move and shoot. I do start Draigo on the board because I need him for the -1/+1 to the reserve roll. I like starting in reserve against space wolves anyways because their Wolf Scouts come on and if they do not have an army to face they are wasted and they do not know what to do with them.
Turn #1
Space Wolf Turn #1
He moves out a little bit and tried to put some shots on Draigo and does 2 wounds to him. Not a good start. 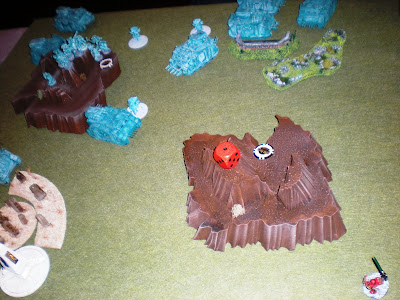 Grey Knight Turn #1
Draigo tucks up behind the hill and starts digging a cave to hide in.
Turn #2
Space Wolf Turn #2
One of his Scout Squads comes in. Since they do not want to dance with the Draigo, so he comes in across the board and jumps into a razorback. Most of his lead Razorbacks pop smoke to get ready for the Grey Knight onslaught!
Grey Knight Turn #2
Well, for reserves I roll a "3" for my Paladins to come in. I think about them coming on, but I thought to myself, if they only get to shoot at me for 3-4 turns that is better than being shot for 4-5 turns right? So I make the decision to have them stay in reserve. I do get a Dreadnaught and my interceptors on the board though.I try to hide behind the hill and shoot at a Razorback knocking off a gun. 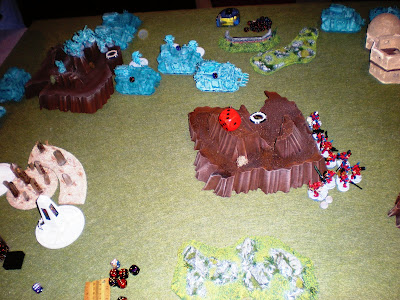 Turn #3
Space Wolf Turn #3
He gets his last Scout squad on and takes a couple of melta shots at my dreadnaught and misses. He then assaults and shakes it with his power fist. He unloads his Long Fangs on my Interceptors and knocks one of the combat squads down to 1 guy. 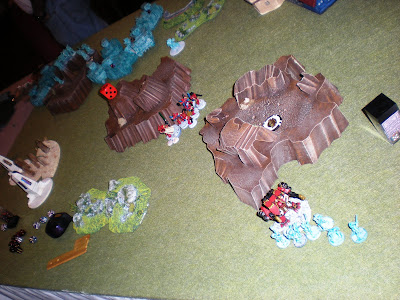 Grey Knight Turn #3
Alright, time to get this party started and see what we can do! I roll for my Paladins and roll a “1” for them to come on. Uh-oh! Well maybe next turn I will have a couple of rounds of shooting at them and that should be good enough…right? I need to shoot him up some to lower his VPs for table quarters and this is starting to be a problem. I do get 2 dreadnaughts and my strikes on the board. My strikes go after those pesky scouts and take them down to the Wolf Guard who again fails to damage my Dreadnaught and the other dreads knock out a razorback. I run that last intercepter back and hide him behind the hill. 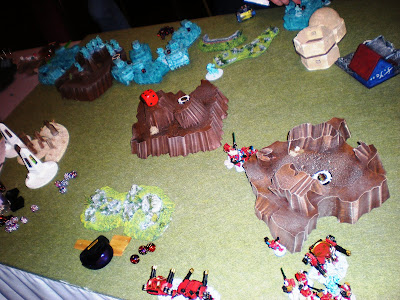 Turn #4
Space Wolf Turn #4
He shoots his long fangs into my dreadnaughts and he hits like crazy, but has a harder time penetrating and damaging.He knocks off 3 arms and gets 2 immobilized results.
Grey Knight Turn #4
Alright…let’s do this! I roll to get my Paladins out of reserve and I roll another “1” Um…that is not good. I am getting hurt bad and nothing is going right for me. I need the paladins on the table not only to do some damage but to have them take some of the fire off my other units. So I do what I can to hide from his fire and try to preserve my Kill Points. I think I kill another razorback around now. 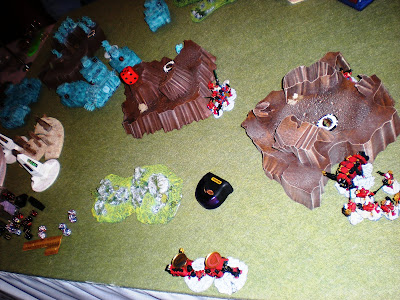 Turn #5
Space Wolf Turn #5
Not much for him to do, so he just waits for me.
Grey Knight Turn #5
I get my Paladins on!!! Not the problem is that there is not a good place to go. All of the terrain is over 12” away from the table edge, and that is not good. So I walk on to the table close to the Objective since this looks like it will come down to tie breakers, and the paladins kill another razorback.
Right side of the table: 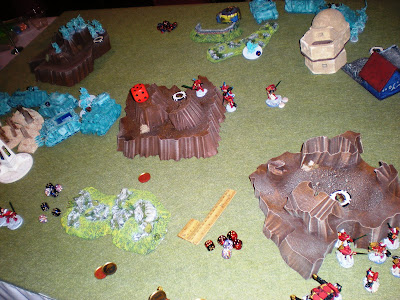 Here is the left side of the table: 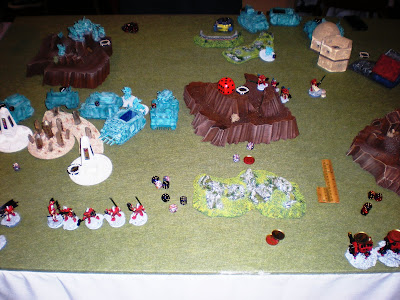 Stelek rolls a 2 and the game ends. That is it, not a whole lot of action
We go to tally up the points:
All of his crap is more than my paladin squad and he holds the lower left, his Long Fangs hold the upper left.
Table Quarters: Draigo and Interceptor hold the upper right. and I have a bunch of stuff on the lower right.
Primary: Tie
Objectives:  He holds the upper right objective, I hold the Center and the Lower Right.
Secondary: Grey Knight Win.
Kill Points: I have 4 Kill Points he has 0, but we do not have to go that far.
There you go I win an ugly game, but winning ugly is better than losing ugly. A win is a win and I will take it.
I really wanted my Paladins to come from reserve on turn #3 and we can really see what each other’s army can do, but fate intervened. Stelek was right to say that I was lucky on turn #5 to have the game end. I was in a bad position and turn 6 would not have been kind to me. I might have been able to kill enough stuff to get a lead in the lower left table quarter to win with the Paladins, and he would have taken the upper right from me. I would then have to shunt my hiding interceptor model to contest his objective on the upper right for the win or the tie and then it would be close for the KP tie breaker.
I was a very odd game. We both had a great deal of trouble killing vehicles. It was also very unlucky to roll 2 “1”s for my reserve rolls and not to get my Paladins on until turn #5. That is 875 points that I am down that can be blowing 2 transports away a turn.
As far as errors go, I see that I made a big one:
Not bringing my Paladins on during turn #2 because I got a little greedy.
Posted by Blackmoor at 11:30 PM