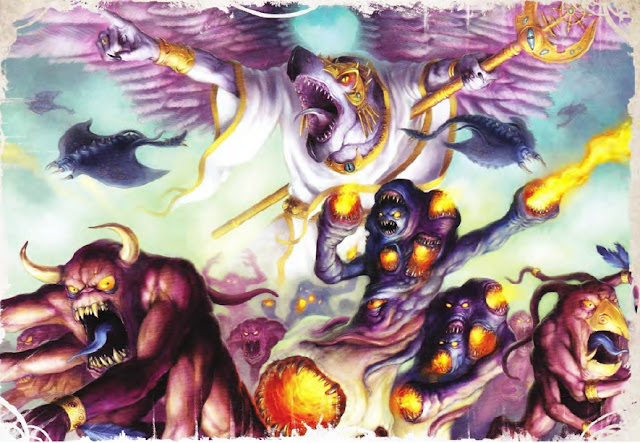 So I have decided to play my Tzeentch demons army at the Broadside Bash next month. Why am I doing it? Well for a couple of reasons. As I said on the 11th Company podcast I like armies that are rare and more of a challenge to win with. Demons fit that to a tee! Not only have they always been very rare (especially in the US) but I will play a pure Tzeentch list.
So why the pure Tzeentch list?
Well one of the reasons is that I have all of the models. I started collecting them for my Thousand Sons army when they could take demons in the last edition of the rules. So when most people do not want to pay the big $$$ for screamers, I already have 10 that have been sitting around collecting dust for the last 10 years. Also I think that Tzeentch Demons might be ok in the game, not good, but ok. Remember that they can reach out and shoot people so the armies that traditionally give them problems like Dark Eldar and Grey Knights will have some of their advantages neutralized.
So what about the comp?
Here is the comp listing from the Broadside Bash:
Here are the guidelines for scoring:
So you will note that you get bonus points for being a fluffy army that takes less effective choices. Well that has a Tzeentch demon list written all over it! Not only am I playing what is considered one of the weakest codexes in the game, but restricting my choices to being a pure Tzeentch list!!!
Comp
Now I have no doubt that I will get a bad comp score. I also fully expect the really hard armies there to score well in comp. The reason for that is that comp does not work, and no one understands it. If you lose a game the army you faced was cheesy. Also if you play marines and their variants everyone knows them, and knows what they do so they always score well in comp. If you play Demons, Dark Eldar, or Necrons or other rare xenos armies’ people are less familiar with their rules, and because of that ignorance they are seen as cheesy whether or not they are.
So why comp?
I also asked the organizers why they have comp and I never received an answer. This is what I like about comp is that no one is able to articulate why they have it. Generally there are 2 reasons to have comp scores and those are:
#1. To handicap the most powerful armies.
#2. To have a more diversified field.
To handicap the most powerful armies
All the codexs are pretty equal these days (within reason) yet they think that comp will solve some of the inequalities? I listen to a lot of podcasts and some of them that do not play competitively say that Tau are not competitive, yet if you listen to others they are very competitive. Tau are very good at killing Grey Knights and can do well vs. a lot of armies. So with people unable to judge the power of a codex, how can you have people give you a score based on it? Also if you look at armies that are less powerful than others, if you lose, how can you tell? If I take a pure Tzeentch demon list, everything will still work and everything will still have a function, so how can you tell if I sacrificed taking some units to be less effective? I will not have Fiends (arguably the best unit in the Demon Codex) but if you have never played a demon player before how will you ever know that I have not taken the most powerful units? You are still going to be getting shot by horrors, flamed by flamers, and melta bombed by screamers. How will anyone know that they are facing a bad army, and it sacrificed a lot to stay to a theme? Especially when Fateweaver is giving everyone a re-rollable 4+ Invulnerable save they will have no idea that that it could have been much worse if I had a bloodlthirster charging them, or bloodcrushers hitting their lines.
Have a more diversified field
People play what they want to play, and when you are playing $65 for a ticket people are trying to win. They are not brining fluffy fun lists when it cost so much. Also they did not make the comp score enough of a deterrent so that more people would be inclined to bring a less competitive army. Also who knows what any comp score will be because it is player judged and at the whim of your opponent. A couple of years ago there were 2 foot eldar players there (Toby and myself) and we had lists that scored very well when we were judged for comp pre-tournament by the judges, but when we played on the table and won we both received a very bad comp score. The funny thing is that at the same time Hulksmash brought his razorwolves (which was one of the hardest armies around at the time) and scored a good comp score.
So if you have such a flawed system that does not work why have it? Other than tradition of course.
Now I might be wrong and might I get nearly a perfect comp score and the hard armies will get next to nothing, but we all know that this will not be what happens.
Posted by Blackmoor at 12:30 PM