Tzeentch demons to an 1750 point RTT

Alright, so I took demons to an 1750 point RTT a couple of weeks ago at Empire Games in Mesa AZ.

Here is the army:
HQ
Fateweaver
Lord of Change w/We are Legion

So getting ready for this game I thought that I would buy some more horrors on e-bay (I have the metal ones from last edition). Then last night I was looking for my horrors, and I could not find my painted ones that I had from 10 years ago, but I did find that I had 25 horrors plus the 10 that I still could not find so I am glad that I did not buy any more because I have enough.

So round 1 Capture and Control and Dawn of War and it was against Dark Eldar. Yeah, I know…
He had a lot of venoms, Vect, a squad of Wytches, a beastmaster squad, 3 ravagers etc.
Highlight I spawned Vect! Hah!

So in the end I was getting beaten, but I had one flamer vs 5 warriors in assault near the objective on the last turn and he ended up whiffing in combat and I killed one warrior and he broke and ran and I moved to contest the objective. There were no ties and if it was a tie the winner was determined by the most VPs, and I ended up winning by 200 VPs. 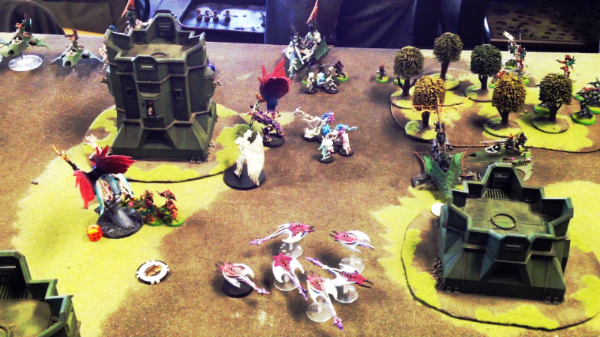 Here is a pic around turn #3. His wytchs got into my Lord of Change early and I could not get un-stuck. He could not hurt me, but I could not hurt them either. After this picture was taken I assaulted the Wytches with my DP and Fateweaver. I still could not kill them. Then his beastmasters hit the combat and I did enough wounds that the beasts broke, but those wyches stayed. They were on me like herpes and I could not get rid of them!

Game #2 was a KP mission with pitched battle against a Space Marine player with an odd army. When you see an odd army you are either playing someone who is very good, or might not know what they are doing. I ended up killing everything except a tac marine squad, and he did not kill any units of mine so you can make your own decision about what kind of player he was.

Game #3 was against a Space Wolf Player in a 3 objective seize ground mission with table quarter deployment. He castled up in the corner and I dropped in front of him. I dropped down and shot up his long fangs. Then I moved forward and started to assault him. He made a mistake by not taking the table quarter with the most objectives, but one with the best cover. I know that if he was busy killing my big monsters he would be out of position to get to the objectives. Well I failed a ton of saves with my MCs and I lost them pretty early, but he was still pinned in the corner. I started to shoot his vehicles so he could not get to the far objectives in time. I kind of forgot about the objectives myself and lucky for me I still had one horror squad still in reserve on turn #4 when I remembered that I need to take some objectives.

Posted by Blackmoor at 9:28 AM