After 2 weeks I have the internet!
I ended up taking my Draigowing to the Bay Area Open. This is what I took:
HQ
Draigo
Troops
10 Paladins w/4 Psycannons, 2 Hammers, 4 Halberds, 3 Swords, Brotherhood Banner
10 Grey Knight Strike Squad w/2 Psycannons, Psybolt Ammo
Fast Attack
9 Grey Knight Interceptors w/2 Psycannons, Psybolt Ammunition
Justicar w/Demonhammer
Heavy Support
Dreadnought w/2 Twin-Linked Autocannons, Psybolt Ammunition
Dreadnought w/2 Twin-Linked Autocannons, Psybolt Ammunition
I was going to write up an article about what HQs to take with Draigowing. The reason why is that each HQ adds something different like Coteaz has his abilities and cheap troops, Inquisitors add stubborn and Grenades, etc. I have been taking a librarian because he seems to add a lot to the army like shrouding to add to their cover save, sanctuary to help in assault. But I struggled in low point games (below 2000 points).
Since I am the foremost Draigowing expert I had to find an answer to why the army struggles at around 1750 points. What I came up with is that the Librarian is really only a support character. He is not killing anything with shooting or assault, but only supports what you already have. So I was paying around 200 points just for a little boost, and at 1750 points that was a lot of change for a model that was not kicking butt and taking names.
So for 200 points (plus 40) I could take a 10-man GK Strike Squad with 2 psycannons and psybolt ammo. 10 Strikes can do a lot of damage with 16 shots at strength 5, and 4-8 shots at strength 7. They can not only dish it out, but they are troops, and can hold 2 objectives etc. They are have a lot more use and utility than a librarian that may or may not help you.
So I think that choice helped me at the BAO.

And my camera jacked up my pictures so I only got a few to download. The picture on top was the beginning of round #1. And this is how the game ended: 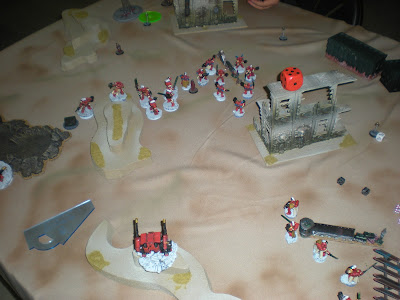 Blackmoor goes to the BAO

Sorry for the lack of updates, but I am without internet access until next weekend.
So last weekend I took advantage of the player base in LA I went to the Game Empire RTT in Pasadena last Sat. and I went 1-1-1. I played my BAO list with some minor modifications since I could not get my printer to work. I was upset at it because the RTT was at 1850 points just like the Adepticon Championships and I want to try out my list for that. Oh well. But 1-1-1 bodes well that there will be some good competition here to keep my game play sharp. I was tempted to go to Thou Shalt Game in Temecula CA, but I was wiped out, and dead tired so I did not want to take the time for the long drive and 4 rounds. Also I just played 7 games with the BAO format (and 10 games overall last weekend) so I wanted to take it easy and check out the local talent.
So at the BAO I went 6-1. I lost to the winner Christian’s Euro Mech IG. I was winning on turns 5 and 6, but I could not shoot his stupid Vendetta down that I had been shooting at all game, and he contested my Capture and Control objective so he had his, he had the Objectives, and I had Kill Points. Oh well.
I ended up tying for 2nd place but the tie breaker was strength of schedule and I guess he had a stronger schedule than I did (although he did not play the winner and highest score Christian), so that dropped me to 2nd and I did not even win best grey knight!
Oh well. I might put up some batreps when I get the internet set up, but I am really busy right now with my move and everything. I joined a league here and I am playing my Eldar, but before I get to fancy I need to finish my Grey Knights for Adepticon.
Posted by Blackmoor at 4:30 PM 3 comments: