So here I am, now down to the final four! It is me, Dash of Pepper’s Dark Eldar, Tony Kopack’s Space Wolves, and Devon’s Grey Knights. I played Tony on Friday night at the invitational and I liked my chances against him. Dash is a wild card because he has a ton of shooting at strength 8 AP2, but I have shrouding that he can’t stop, and I can knock those paper airplanes out of the sky pretty easy. Objectives against him might be trouble in the primary.  Then there was Devon, I said that Grey Knights are my worse match-up and his army is a fast moving assault army just like the kind that I struggle against.
So when they announce the pairings, I get Devon and his Grey Knights. He played Xaereth in round #6 before and you should read his write up of his and Devon’s game because it gives some interesting context.

Devon is from Jacksonville and while I lived there for 6 months about 3 years ago I do not think we ever crossed paths. I spent most of my 40k time down in Orlando except for a tournament or two at War Dogs, so that might be why we never ran into each other.
My List
2000 Points of Grey Knights
HQ
Draigo
Librarian w/Warding Stave, Might of Titian, Quicksilver, Sanctuary, The Shrouding
Troops
10 Paladins w/4 Psycannons (1 Master Crafted), 2 Hammers, 4 Halberds (1 Master Crafted), 3 Swords (1 Master Crafted), Brotherhood Banner
6 Grey Knight Strike Squad w/1 Psycannon
Fast Attack
9 Grey Knight Interceptors w/2 Psycannons, Psybolt Ammunition
Justicar w/Master Crafted Demmonhammer
Heavy Support
Dreadnought w/2 Twin-Linked Autocannons, Psybolt Ammunition
Dreadnought w/2 Twin-Linked Autocannons, Psybolt Ammunition
Dreadnought w/2 Twin-Linked Autocannons, Psybolt Ammunition
So there it is…28 Models+ 3 Vehicles
Devon’s Grey Knight List
HQ
Librarian w/Warp Rift, Shrouding, Might of Titan, Quicksilver, Sanctuary, 3 Servo Skulls
Coteaz
Elite
Venerable Dreadnaught w/Multi-Melta, Heavy Flamer, Psyflame Ammunition.
Troops
Henchman Squad
·         6 Death Cult Assassins
·         5 Crusaders
·         Banisher
Henchman Squad
·         6 Death Cult Assassins
·         5 Crusaders
Henchman Squad
·         3 Warrior Acolytes w/Flamers
·         2 Warrior Acolytes
Razorback w/Psybolt Ammunition
Henchman Squad
·         3 Warrior Acolytes w/Melta Guns
·         2 Warrior Acolytes
Razorback w/Psybolt Ammunition
5-man Grey Knight Strike Squad w/Psycannon
Razorback w/Lascannon, TL Plasmagun
Fast Attack
Stormraven
Heavy Support
Dreadnaught w/2 Autocannons,Psybolt Ammo
Dreadnaught w/2 Autocannons,Psybolt Ammo
Land Raider Crusader
Pre-game thoughts
So looking at his army I know that he is going to come after me with his DCA and jump out of his Stormraven and Land Raider all the while trying to shoot up my dreads with his dreds. So my plan is to kill those 2 vehicles so he can’t assault me and then shoot down the DCA from a safe distance. If I can do that, it should be easy for me, if I can’t I will be in trouble. Also I have learned to hate Stormravens because those stupid mindstrike missiles will kill my librarian dead, and I need him to cast sanctuary to slow down those DCA in assault.
Read more »
Posted by Blackmoor at 12:13 AM 6 comments:

I am pushing to call the Necron build that has a lot of tomb spiders spawning scarab swarms "The Ant Farm".
Posted by Blackmoor at 5:33 PM 6 comments:

Well my 6 week weighloss challenge came to an end today (It was about time, I was going nuts the last week).

I drove to Downtown and weighed in. I ended up losing 40 pounds in 6 weeks and ended up winning! The second place finisher lost a total of 34 pounds. I feel sorry for that guy. He lost 34 pounds and ended up with nothing. hah!

So I have the off season to work on next year’s army. There are a few events on my schedule I might go to before Adepticon like Boota Con in Mesa AZ in January, The Broadside Bash in February, and The Bay Area Open II in March before Adepticon.

So it is time to prepare for Adepticon 2012!!!
Lucky for me I jumped on the Adepticon bandwagon early because I thought that they would sell out very quickly, and what do you know? After about only 24 hours most of the 40k events have sold out!

So my question is, what army to bring to the Championships, and why am I asking this question now?
The reason why I need to ask the question now is that I am a chronic army switcher, and a slow painter and that is a bad combination. So often times I am playing with a half painted army in tournaments because I did not make up my mind until a week or two before the tournament. It is also the reason why I can win a tournament that does not have soft scores, but struggle in ones that do. The funny thing is that I am a good painter if I ever finish an army.
This year is Adepticon’s 10th anniversary and I wanted to do it right. I have had sporadic results there and I want to make an honest effort this time. Last year I took Demonhunters to Adepticon, and the year before that I took my Thousand Sons, so it is no wonder why I have had some trouble placing well in Adepticon’s Championships.

I was thinking about playing several armies and I think I will just stick with my Grey Knights. They give me the best chance to win if I want to take this event seriously. By then though, people will know the weaknesses of Paladins, and I will have more trouble winning with them but I believe in my list, and I think I will be OK. Also the Grey Knight codex will not be the new kid on the block, and the Necrons and other armies will take some of the luster off of them, so I hope I will not be one of 200 Grey Knight players there (I have a feeling I will be though).

So what do I do about appearance? Well if you have read this blog for a long time, and you have seen my avatar, I have been itching to do a pre-heresy Thousand Sons army. I have all of the bits and pieces for it and I also think they will look nice on the table top, as a Grey Knight army (I also won’t hurt either if GW comes out with a Chaos Legions book in the near future).

This is what I am thinking:
There is a resin Magnus the Red floating around and that would make for a good Draigo.
Librarian? Ahriman of course.
Then pre-heresy assault marines would look cool as interceptors.
Regular Marines as Grey Knights
Paladins as Magnus’s Coven
Dreads as well…dreads

The problem I have is the weapons. I need to re-check my Thousand Sons book by Graham McNeil and see what I can do about that. I need storm bolters and psycannons and I will need to think about conversions. Combi-bolters will work out well for the terminators, but the power armored marines will be an issue. It might be that I just give them bolters, and everyone knows that they are storm bolters since grey knights have no other weapons. Incinerators are easy because you just have someone doing psychic flames, but psycannons might be harder. Maybe some kind of magic effect, but I don’t know.

Well, I have been dieting an exercising for the last 5 weeks as part of a 6 week weigh loss challenge.  I am now in the home stretch, and the end is in sight. Just 5 more days and I am free! Well not really free, but I will not be on such a restrictive diet that I have been on to win this challenge. As a 40k gamer I am competitive, and if you challenge me to something, I will try to win.

The winner gets a nice price of a $700 membership to Gold’s Gym in downtown Phoenix.

Here I was hiking up Squaw Peak on Saturday. 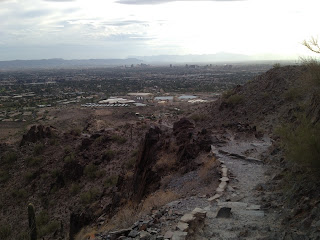 It is one heck of a climb, and I noticed that everyone on the trail was in great shape, and not a bit of fat on any of them.
And as a side note, dieting takes a lot of time! I make a lot of my own meals now since I can’t eat out, and that takes time and exorcizing takes a lot of time as well.
Posted by Blackmoor at 9:45 PM 1 comment: