How does my army deal with flyers? 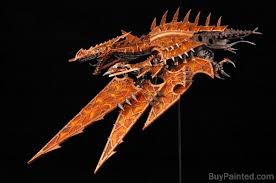 So Ryanjj405 below asked as question that I thought I would answer in a new post:

I have tried a similar list but I cannot handle full on Necron air or Triple Hell Drakes, how do you plan on dealing with those?


I do believe that everyone does need to have an anti-flyer strategy so here is mine.

You will note that I do not have an aegis defense line or bastion or anything else with sky fire. If you think a quad gun will shoot anything down that has a 12 AV (unless you have fire dragons) is going to be in for a big disappointment. I felt that I could spend the points better elsewhere.

Here is my anti-flyer strategy
Posted by Blackmoor at 9:33 PM