E-mail in! How to beat Land Raider spam with Draigowing? 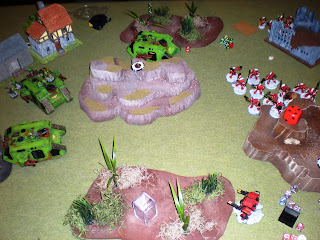 My name is Josh, I’m from South Africa and have been following your blog for a couple of weeks, I must say from everything I have seen thus far, well done. I have been playing a Draigowing since the new codex arrived and as I’m sure you can understand I’m quite happy with it, partly as a result of following your blog.

The other day however I ran into quite a problem. I had a friendly against a guy at my FLGS (1750pt), just for kicks he decided to field a list with 3 land raiders, it didn’t go so well. It may have been a friendly but it got me thinking about what I would do in a tournament setting if I had to face something like that, I would be very interested to hear your thoughts.

If I had to design a list to counter the raider spam I don't think it would be too much trouble, but then it would no longer be a Draigowing it would be a Coteaz list. So my question is this, how would you deal with multiple high AV vehicles with a Draigowing, be it raider spam, leman Russ spam, or even just a 3 battle wagon list?

I don't know how many questions and stuff like this you get, or how you feel about them so I’m not necessarily expecting a reply, don't feel obliged.

Thanks
Josh
Land Raiders are always tricky. The meta game has moved away from Lascannons and is now focused on a lot of strength 8 shooting from units like long fangs with their missile launchers, and Psyfleman dreadnaughts with their autocannons. This makes Land Raiders more attractive because of their durability. You still will not see too many Land Raiders at tournaments because Dark Eldar and Imperial Guard can kill them with little effort, but that doesn’t do you any good if you find them across the table.
For Draigowing the good news is that 3 Land Raiders are a ton of points, and there are a few ways to kill them. As far as them being a threat, they are a moderate ranged threat because if they have the Godhammer (basic) land raider they will be shooting a couple of lascannons a turn at you, so most of the time they will try to shoot at your Dreadnaughts, so your paladins will be unmolested. If they do choose to shoot at them, then Draigo eats a lascannon shot, and the squad will have to take one and hopefully cover and shrouding will mitigate some of the damage. The other 2 types of Land Raiders (Redeemer, Crusader) are not much of a threat to paladins from shooting because they do not have the high strength/high AP weapons that paladins fear other than a multi-melta.
What you do need to worry about are their contents. It they have thunderhammer/storm shield terminators on board you might be in trouble, so there are a few things that you can do to protect yourself. If your 10-man paladins are properly equipped, they should be able to withstand a charge by a 5 man-squad of assault terminators, but 10 are going be trouble. The paladins need the Brotherhood Banner because you need all the attacks you can get. That also means you need to give them counter-attack from Draigo’s grand strategy. Since paladins will go first, you have 7 terminators with 4 attacks each hitting in initiative order so quick mathhammer* tells us that they have 28 attacks, doing 18 hits, with 15 wounds (strength 6). That will drop 5 terminators. Your banner bearer will kill .37 and at the same time your 2 demonhammers will kill 1.5 for a total of 7 dead terminators.  5 terminators hitting back will do 15 attacks, 7.5 will hit, 6.25 will wound. After saves, that is 4 dead paladins. That is not good because you will lose combat by 1. If they have Null Zone or Vulcan they will kill even more.
So it is imperative that you do not get assaulted by multiple terminator squads, so you will need to slow them down. In my experience, psycannons do a good job of killing land raiders. 5 paladins should have 2 psycannons each that can move and shoot to full effect so let’s run the mathhammer* on them killing a Land Raider. With 8 psycannon shots 5.3 will hit, .888 will rend, so you are looking at getting a damage result each time you shoot at one. With rending you have a 29% chance of glancing, and a 59% chance of penetrating (I am doing the math wrong because each shot has a chance to penetrate so in theory you have a chance to penetrate a land raider 8 times but this is just simplified). So you just need to keep shooting at them until you take them down. Remember that you need to just keep moving and shooting so that they do not get lined up so they can assault you. Try to keep them 18”+ away, and get angles on them so that only one is in range.
At the Nova Open I played against a 3 land raider army and another with just one in it and they are a pain, but you can slowly grind them down one land raider at a time.
Of course the other option for you is Stormravens. You can fly 24” and shoot a TL Multi-Melta at them and still get your shrouding from you librarian for the 3+ cover save. Pack a couple of Dreadnaughts in there with multi-meltas too, and you should be ok.
And then the last way to kill them is in assault. With Hammerhand you are swinging around strength 10 Demonhammers so you can go ahead and use them and they should open them up You can out-flank an interceptor squad with a Justicar with a Demonhammer, and 3 attacks on the charge should do some damage as long as it did not move very far. Of course this could cause certain problems if you have not properly disposed of their contents yet.
*Remember that with any mathhammer it will not tell you what will happen, it is only a tool to tell you what should happen.
Posted by Blackmoor at 10:27 AM