Nova Open Batrep #4
So here we are at the beginning of day #2. At this point I am in good shape after going 4-0 on day #1. This also affords me a look at the other armies to see what my competition is now that they are sorted out to the top 8 tables. It was a lot of good players, and some tough matchups for me, so I was not too confident with how far I think I am going to go.
I also started to count down the final games like they do at the NCAA College Basketball tournament, so at the beginning of day #2 here I was in the sweet 16!
There were a lot of Grey Knight armies, and a smattering of the other armies, so it was a surprise when I find out that I will be going up against Orks. Now I have not lost to orks with my paladin army, so I am feeling pretty good about the match-up, but again, I take nothing for granted and he got to be 4-0 for a reason and I have to respect that.  What Orks normally do is charge my Paladins, and I do a ton of wounds to them and if they are still fearless they will explode from the damage, and if they are not, they will break and never come back.
Now I have been reading Bat Manuel’s post on Dakka for a while and I had no idea that my opponent and Bat Manuel were one and the same, but what I did find out was that we went to the same High School near Los Angeles, so that was cool!

My List:
2000 Points of Grey Knights
HQ
Draigo
Librarian w/Warding Stave, Might of Titian, Quicksilver, Sanctuary, The Shrouding
Troops
10 Paladins w/4 Psycannons (1 Master Crafted), 2 Hammers, 4 Halberds (1 Master Crafted), 3 Swords (1 Master Crafted), Brotherhood Banner
6 Grey Knight Strike Squad w/1 Psycannon
Fast Attack
9 Grey Knight Interceptors w/2 Psycannons, Psybolt Ammunition
Justicar w/Master Crafted Demmonhammer
Heavy Support
Dreadnought w/2 Twin-Linked Autocannons, Psybolt Ammunition
Dreadnought w/2 Twin-Linked Autocannons, Psybolt Ammunition
Dreadnought w/2 Twin-Linked Autocannons, Psybolt Ammunition
So there it is…28 Models+ 3 Vehicles
Mike H’s Orks
HQ
Ghazghkull Thraka
Ork Warboss w/Power Klaw, Warbike, Cybork Body
Elite
6 Kommandos w/Big Shoota
Snitrot
Troops
29 Ork Boyz w/3Rokkits
Nob w/Power Klaw, Bosspole
29 Ork Boyz w/3Rokkits
Nob w/Power Klaw, Bosspole
29 Ork Boyz w/Shootas, 3Rokkits
Nob w/Power Klaw, Bosspole
29 Ork Boyz w/Shootas, 3Rokkits
Nob w/Power Klaw, Bosspole
19 Gretchin
Runtherd
Fast Attack
2 Warbuggys w/TL Rokkit
2 Warbuggys w/TL Rokkit
2 Warbuggys w/TL Rokkit
Heavy Support
Looted Wagon w/Boomgun
Looted Wagon w/Boomgun
Well, this is a surprise, a green tide a mile wide. I have not faced one of these armies before in a very long time. No Killa Kans? No Battlewagons? What I do know is that he will add the Warboss to Snitrot and try to get him in behind my lines, so I have to be very careful of my deployment because I do not want to get caught in a big multi-assault, and I do not want to get my dreadnaughts tied up, or my GKs in an assault near the back table edge.
Mission:
Primary: Table Quarters
Secondary: Kill Points
Tertiary: Objectives
Well it is table quarters, and although I do not know what he will do, I am pretty sure that I can tie him on the primary (and if I can’t I am losing badly anyways), but his army is kind of hard to get Kill Points off of, so this will be interesting to see if I can get the secondary.
Deployment: Pitched Battle
Setup
I basically set up in a line with my Dreadnaughts in the back of the board. I put my strike squad in front of my dreadnaughts in cover. This way if he wants to go after my dreads they are there to counter-attack them, and if he goes after the strike squad I am in cover to slow him down. Since I do not need any troops, I make my paladins counter-attack.
He does not have any “low hanging fruit” for me to get easy KPs off of other than his vehicles so he starts them in reserve and just starts across the table from me.
Turn #1
Grey Knight Turn #1
I move forward a little and unload on some orks! I am thinking about his run rolls, and how far I have to move back in his turn to be out of charge range etc for the next turn. 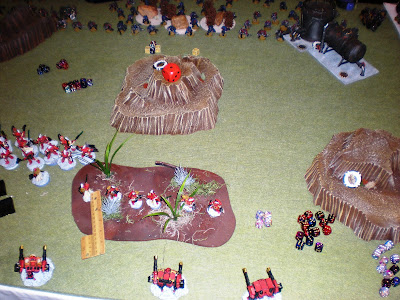 Ork Turn #1
He just moves up a little and shoots at me. 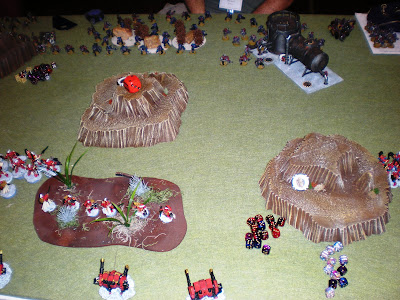 Turn #2
Grey Knight Turn #2
Well, that was an odd turn of events. I have never seen an ork player this unaggressive. I expectied him to run at my paladins as fast as he can, and then get wiped out by them. Now this put me in a bind, since he is not coming after me, should I go after him? So I thought I would wait for his reserves to come on to see what he is doing with them before I commit my army to a course of action. So I hang back and keep unloading on to the same unit and even though I do a lot of wounds, he has cover and a 30-man unit. 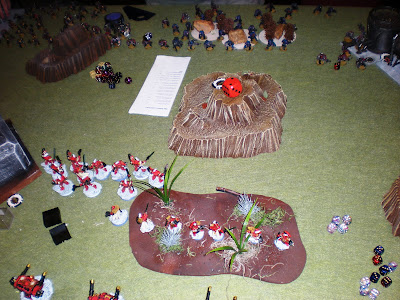 Ork Turn #2
He gets on most of his vehicles and tried to hide them in the back right and starts to kill my interceptors that are on that side of the table. 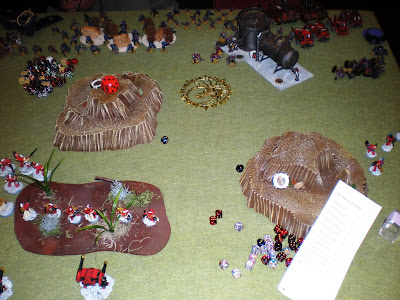 Turn #3
Grey Knight Turn #3
Snikrot has still not made an appearance, so I pretty much have to keep up my defensive formation. My dreadnaughts all start to tear apart his vehicles, cover save or not. Since this game looks to be a tie on the primary, I need to get all of the KPs I can, because I do not want it to come down to objectives or I am hosed. 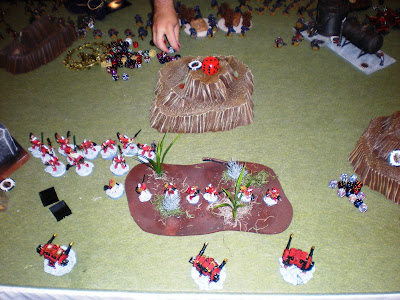 Ork Turn #3
Snikrot+Warboss finally makes an appearance, and he goes after my Interceptors on the right and wipes them out. The squad that my Paladins have been shooting to death are down to a couple of guys and they hide behind a hill. This is not going to well.
(No Pic)
Turn #4
Grey Knight Turn #4
Well, I keep hammering away at his vehicles killing some more. I am starting to take the lead in KPS. 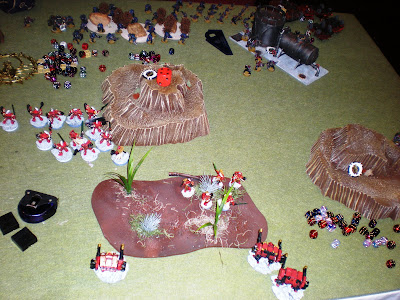 Ork Turn #4
He keeps on shooting at me, and keeping his distance.
(No picture)
Turn #5
Grey Knight Turn #5
Well the game is getting close to the end. I am doing frantic math to see who has the table quarters, and what I need to hold them and the Paladins and my HQ can hold one, and 2 Dreadnaughts and my Strikes are more than Snitrot and the Warboss, so I am ok there, but KP are close. 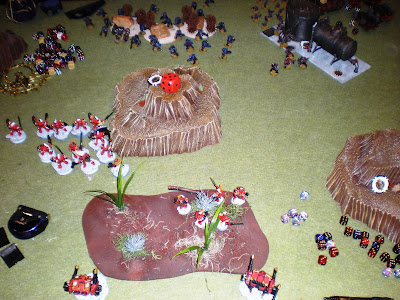 Ork Turn #5
He starts to move his units up on the right, and if the game goes on longer, he might have a couple more units in my lower right table quarter.
Turn #6
Grey Knight Turn #6

Well, I start to do the math. A full Paladin squad and Draigo (950 VPs) is more than what he has in his back left table quarter so I move them into there, and he will not be able to get them out of there either. Snitrot and the Warboss and an Ork Boyz mob is less points than my Librarian, the Strike Squad, and 2 Dreadnaughts so I move them into the lower right, and I only have my Dreadnaught in the lower left.
Ork Turn #6
Not much for him to do at this point and he moves the units he can into the table quarters to try to win or tie.
The game ends and I end up winning 3 table quaters to one. 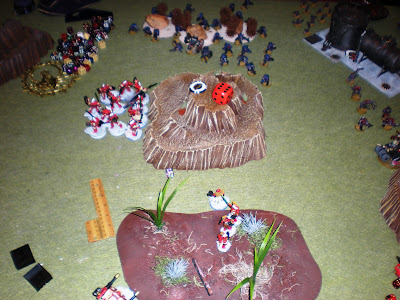 I think I would have won on KPs if it went to the tie breaker, but we did not have to go that far.
It was a really good game. I was shocked that he just stood back and did not advance. He said that he knows how those fights turn out when you charge Paladins. I have never played with an Ork player who has had experience with them and knows how the fight turns out. Normally they just charge me and get wiped out. He was cagey, crafty and wily, but his army was just a bad match up against mine. As long as I did not make a huge mistake he just had not have an answer for 10 paladins.
Posted by Blackmoor at 8:00 AM