So after beating Farmpunk I am up there at 3-0 and I find out that I will be going up against a Tyranid army played by Casey C. He must be good because he is up here with me, so even though Grey Knights match up well against Tryanids, I still need to be weary of them.
Batrep after the jump 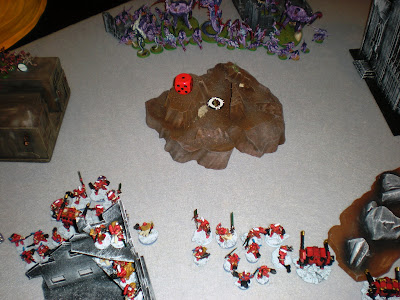 Turn #1
Grey Knight Turn #1
I have not played against Ravenors in a long time andI have no idea what they can do. Since I do not want to find out the hard way of what damage they can do, I shoot and kill them and now there is a hole in his lines where they once were,. 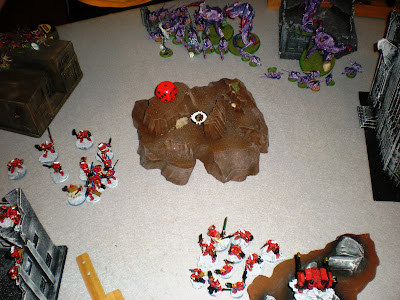 Tyranid Turn #1
He moves forward. He pops some shots at me and doesn't do anything. 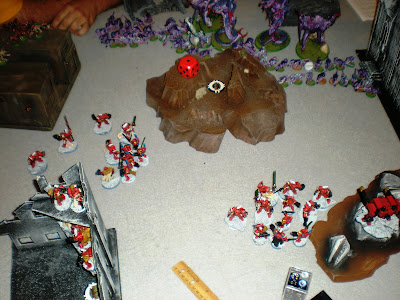 Turn #2
Grey Knight Turn #2
I keep moving forward. The interceptors on the right go after his genestealers in the building and kell several of them even though they went to ground. My Paladins are going after his Hive Guard and the Dreads go after the Zoanthropes. 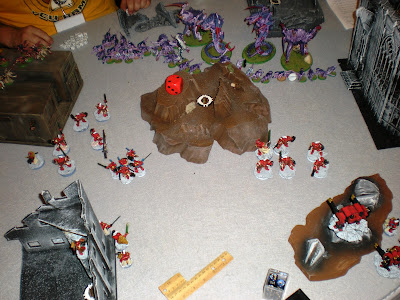 Tyranid Turn #2
He throws the kitchen sink at my Paladins on the left. He shoots me with his devil gants (damn those guys can shoot) and charges me with a Genestealer squad, termagants, and a Trygon. I fail to get off my sanctuary, but the Genestealers are going through terrain so they go last anyways. The only model that I have in B-T-B  with the Trygon has a halberd and he gets to strike first. I roll to hit, and I only hit once with my 3 attacks, and since the Librarian was unable to get off his hammerhand due to Shadows in the Warp I need to roll a '6' to wound and I roll it! Then I activate the banner and he dies from the force weapon. Then I get to beat on the genestealers and gants. I end up killing at ton, and his attacks knock me down to 3 paladins with one wound left and the Librarian. He loses combat by a lot and everything dies to being fearless and suffering no retreat wounds.
Turn #3
Grey Knight Turn #3
I hate Devilgants and I throw my Interceptors at them and kill them. 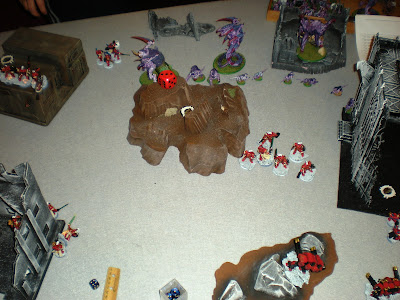 Tyranid Turn #3
He kills my interceptors that killed his devilgants on the upper left. He has a genestealer on the loose in the lower right. I have no idea where he is going, but there he is. 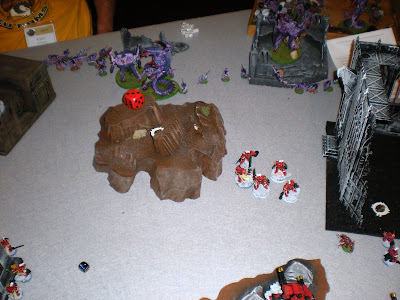 Turn #4
Grey Knight Turn #4
I keep shooting and moving forward. It looks like he does not have very many units left. 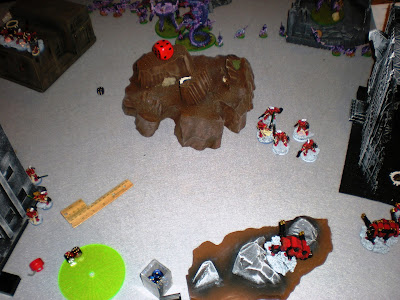 Tyranid Turn #4
He goes after my wounded paladin squad with his trygon and some gants but he shoots them before he assaults and kills one of them. Of course they are required to make a morale check and I fail (for those keeping track at home, each time I have to make a morale check with paladins I have failed it). The good news is that he is not close enough to assault.
Turn #5
Grey Knight Turn #5
My paladins are too close to the Trygon and they keep on falling back. Lucky for me that his other flank is getting rolled up. On the right side of the table I take down the Tervigon and move my interceptor squad to clear out the termigants that were left on the back right objective.
Tyranid Turn #5
I have a dreadnaught on the right side that I tried to get out of the way of his Trygon. The problem is that those things are so fast that with fleet he is still able to get to it. His Trygon assaults my dreadnaught and kills it. He uses the consolidation move to get back to within 6" of the broken paladin squad. On the right side of the table he moves his last Tervigon over to try to get to my Interceptors.
Turn #6
Grey Knight Turn #6
That stupid Trygon is going through my whole army. It is now headed at my strike squad so I try to get them as far away from it as I can, and still be near the objective. I am in cover so if he does make it to me I will get to strike first.
Tyranid Turn #6
Well, the Trygon is with in charge range of the strike squad and he assaults them and wiped them out. I did not roll a '6' this time to wound although I had more chances to do so. The good news is that on the upper right his Tervigon is out of charge range (whew!)
We roll and the game ends.
Here is the Left side of the table 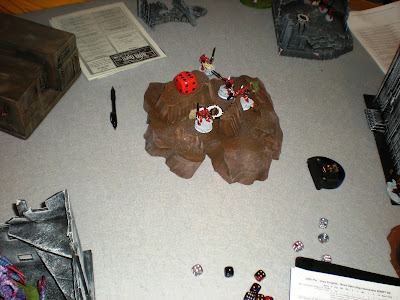 Here is the right side of the table 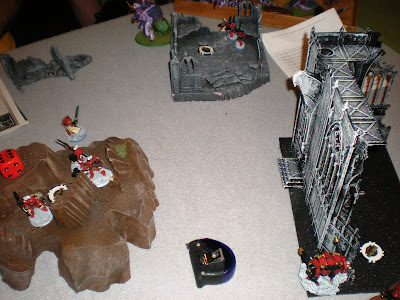 Although it was a close game, I had the center objective, and the upper right, and he had one on the upper left with a small squad of gants.
Note: I can't remember if that Dreadnaught in the lower right was scoring, but it's placement leads me to think that it was. It it wasn't, if he got his Tervigon into the Interceptor squad he might have won, otherwise he would have just tied me, and I would have won the tie-breakers.
This game had wild swings of luck. The fact that my paladins killed his Trygon was lucky, and the Paladins failing a leadership check was unlucky. Those stupid Paladins get walk off the table again. I wish this was a rare occurrence like it should be, but it is all too common. This time though, it did not cost me the game.
The good news is that at 3-1 Casey made it in to the 4-0 bracket due to his scores, because they were short 2 players to fill out the bracket. Of course his first game in day #2 he was blown off the board by Dash of Pepper, but still making that far with Tyranids is an accomplishment.