Here is part 5 of our 5 part series

Mission:Protect the Fallen
Each Player places 2 objectives. Each objective will be marked and you assign points to each objective. You secretly bid 0,1,2,3 for each objective marker one of those four values with no duplication.
Deployment: Triangle Deployment
Objective placement:
I have a small and elite army so I want my objectives close together. What I did not realize is that he had only 2 small scoring units so he wants them together as well. The objectives were basically in a 12"x12" square in the middle of the table. .
Setup
I won the dice roll to go first so I wanted him to go first because it was an objective mission (I am still scared from my Adepticon loss).
Since he was all pods, he had nothing to deploy. I was thinking about starting on the board, but you cast Warp Quake (to keep the Drop Pods away) in your movement phase so he would be all over me before I could get it off so I decided to I keep my whole army in reserve, and Deep Strike the Paladins.
So there is nothing on the board
Turn #1
Blood Angels Turn #1
He drops half of his army. 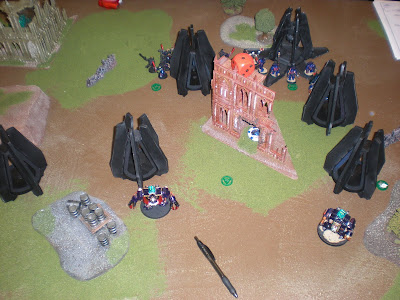 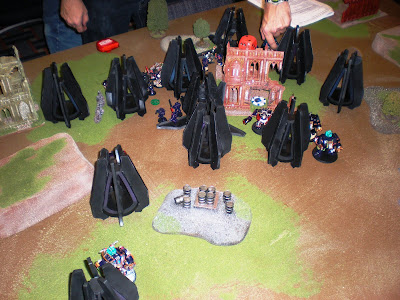 Grey Knight Turn #2
Well, that is a lot of Drop Pods. Not only do I have to cut down all of those units, but I need to kill those Drop Pod contesting objectives.
So I roll for my reserves and I get all of mine in (but I only have 3 units). So I need to get to work. I move on and I deep strike the Paladins in my deployment zone (and Draigo almost scatters off of the table).
I shoot at the Dreadnaught on the right and I take off an arm. On the left I shoot the first Dread and don't do much to him, but I do kill the Dreadnaught behind him. The Purifiers then assault the dread on the left (with the help of Might of Titan) and they take a beating, but the Knight of the Flame with the Demonhammer takes it out. 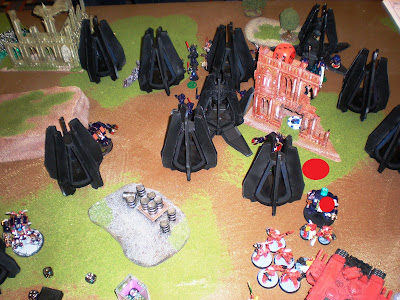 Here is another picture taken after the dread moved up on the right. 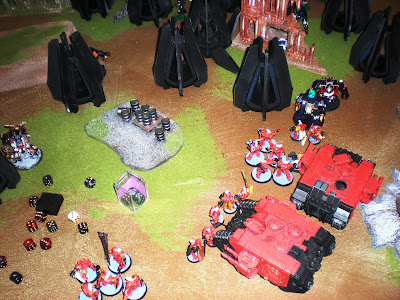 Turn #3
Blood Angels Turn #3
I get charged by Dreadnaughts! A lot of them have Melta Guns and Magna-Grapples, but the do not do much harm. The one armed Dreadnaught charges Draigo and his boys, and he makes shot work out of him. The other Dreadnaught charges the Librarian and hits me with a lot of Blood Talon attacks, but I get lucky and roll several Inv saves, but I do nothing back. (3 Dreads Down, 5 to go!) 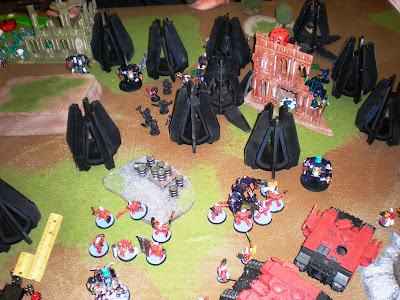 Grey Knight Turn  #3
Shooting immobilizes a Dread on the back left.  The Paladins go after the Death Company and kills all of them except the Reclusiarch who makes his "no retreat" saves. The Librarian's squad immobilizes the dread and takes off a blood talon to slow down his attacks (Side note. he has a librian dreadnough in the runis that has a psychic hood that is shutting down my psychic powers), 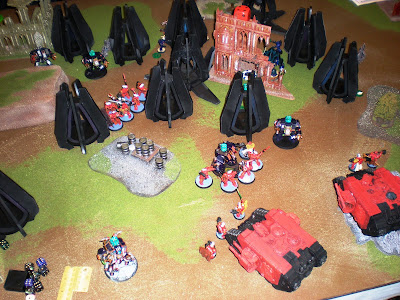 Turn #4
Blood Angels Turn #4
The Drop Pods are shooting at my strike squad and he has so many of them that he killing guys. His Librarian Dread comes out of hiding and pops a shot at my dread with a blood lance and stuns it. He then charges it and I get a sanctuary off and he rolls a "1" and immobilizes himself. Draigo kills his Reclusiarch.
(No Picture)
Grey Knight Turn #4
I start to shoot at Drop Pods. There is not much left to shot and they are on my objectives. I get my Purifiers out of the Land Raider to shoot at his advancing assault squad and kill one guy. Draigo and his boys are surrounded by Drop Pods so I start to kill them so he can break out. 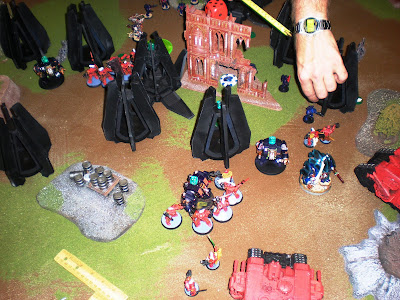 Turn #5
Blood Angels Turn #5
His Librarian dread shoots my other Land Raider and takes off a Lascannon. His Drop Pods shoot my strike squad down to the Justicar. He assaults my purifiers squad and takes them out. 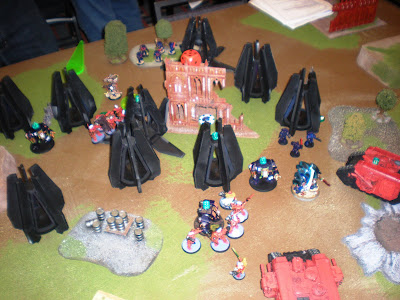 Grey Knight Turn #5
I need to get to the objectives! My Land Raider tries to ram the Drop Pod that I am having trouble killing, but gets immobilized on the wrecked dreadnaught. My other Dreadnaught shots down the assault squad to one guy. Draigo kills a Drop Pod that was on an objective. My eternal struggle with the Dreadnaught finally ends when he does a wound, and the Paladins roll an 11 and break. Then I roll 10" for their fall-back move and I almost ran off of the table (whew!). 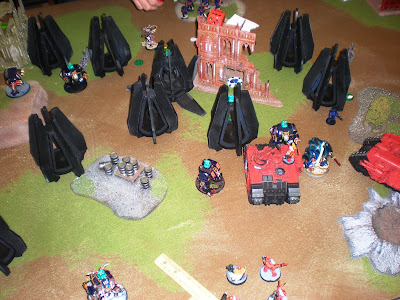 Turn #6
Game does not end


Blood Angels Turn #6
He does not have much left, so he moves his last dreadnaught toward Draigo's squad. 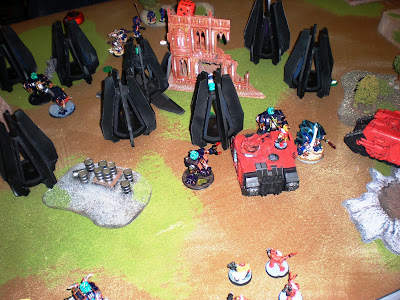 Grey Knight Turn #6
The right Land Raider shoots his Drop Pod and kills it. The other Land Raider kills his last Assault squad member. My Paladins shoot at the Dreadnaught that locked them in combat forever and kill him. The Strike Squad Justicar gets out of the Land Raider and runs to the objective. Draigo goes after his assault squad that is standing around watching him and takes them out. 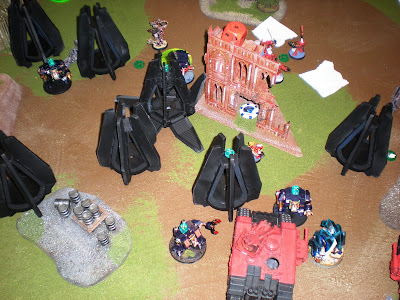 Game End
So I end up with seven points worth of objectives for the massacre and full points.


So for the Tournament I went:
2 Massacres
1 Minor Victory
1 Draw
1 Minor Loss
Posted by Blackmoor at 1:45 AM