Mission: Search for the Dead
At the end of a players movement phase they may search a terrain feature for an objective when they have an unembarked unit with a WS on it on a roll of 3+. If an objective is found, you place it in the terrain feature. If unable to find one, the next squad can search for an objective. A maximum of one objective can be found each player turn.
Deployment: Pitched Battle
Setup:
He wins the dice roll to go first…hmmm an alpha strike army going first. That is not good.
Imperial Guard Setup:
Here is the left side of table. He has 2 Manticores behind the building on the left. 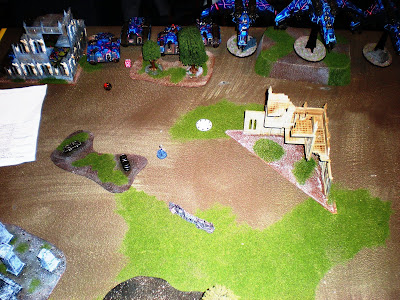 Here is the right side of the table. He has his last Manticore and 2 Chimeras behind the building on the right. 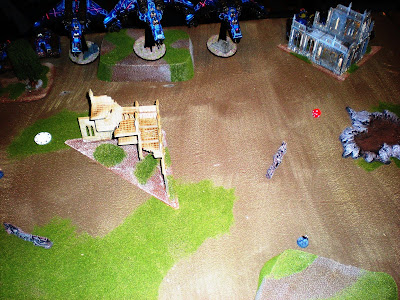 Grey Knight Set Up:
Are you kidding? I am hiding. I will see you on turn #2.
Turn #1
Imperial Guard Turn #1
He waits for the pain train to pull into the station!!!
Grey Knight Turn #1
*Crickets chirping*
Turn #2
Imperial Guard Turn #2
He shuffles his Valkyries so he gets a 4+ save.
Grey Knight Turn #2
Lets get this party started! I get on everything except my land raider with the strike squad.
I thought that I would make this a half table affair and I deep strike near my servo skull and Daigo and his squad scatters off the crater that I wanted to be in, but my librarian made it in. The purifiers move on and jump out of the land raider. His Manticores are hidden and don't have AP2, so it is time to take down the Valkyries!  I unload on them and take one down and stun the other two. 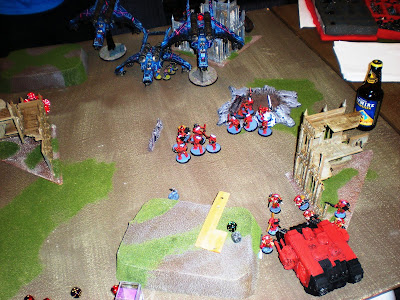 Turn #3
Imperial Guard Turn #3
He unleashes hell on my paladins and takes 3 out. It does not help that I rolled an '11' for shrouding.
(No picture)
Grey Knight Turn #3
I shoot down another Valkyrie and stun the other. I shoot down the squad that came out of the first downed Valkyrie and run them off of the table. 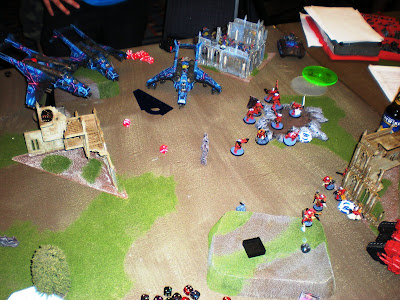 My strike squad comes on the left side and I stun a couple of Chimeras. 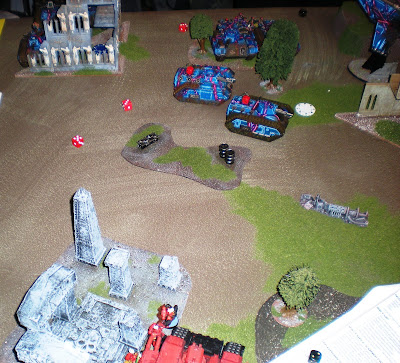 Turn #4
Imperial Guard Turn #4
He keeps shooting and I am starting to run out of Paladins. I lose 2 more. 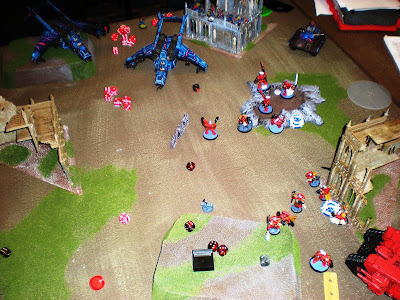 Grey Knight Turn #4
I move forward. I shot down the guard squad in the building. I shoot up the chimera on the right and I immobilize it. The land raider shoots at the manticore and I penetrate it and...I immobilize it. That was the worst result possible. 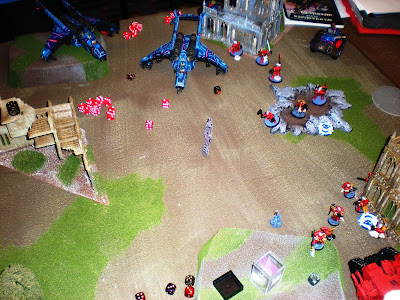 Left side my land raider blows up the last Valkyrie. 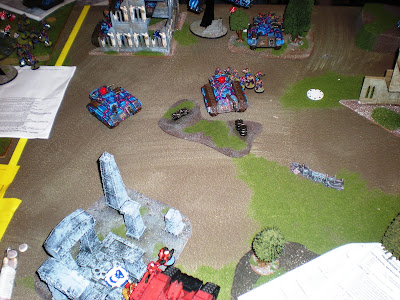 Turn #5
Now lets talk about objectives.
Look at the pictures above. On the right hand side there is an objective in the building with the manticore, there is and objective in the crater in the middle, and one in the building with the purifiers.
On the left there is an objective in the building with the manticores, and one in the back forest. There is also one in the ruins with my strike squad.
Imperial Guard Turn #5
I get shot some more, but he is running out of stream. He gets out of his Chimera and shoots one squad down to Draigo+Demon Hammer Paladin (Draigo can take a some shots!) and the Libraian only has 2 paladins left with him.
(No picture)
Grey Knight Turn #5
Well it is the end game so it is time to get busy. I am running out of guys so I have the Librarian move up to help out Draigo because I am worried about losing the last paladin and losing the scoring unit. Draigo goes after the infantry squad and kills some but they hold. The Demon hammer splits off and hammers the chimera and stuns and takes off a weapon and immobilizes it. Land Raider stuns the manticore.
Here is a close up of the action: 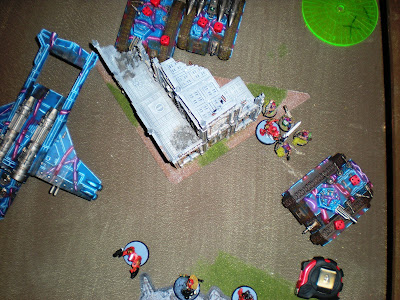 Here is the left side. My purifiers spread out to cover 2 objectives while the librarian is headed out to the action. 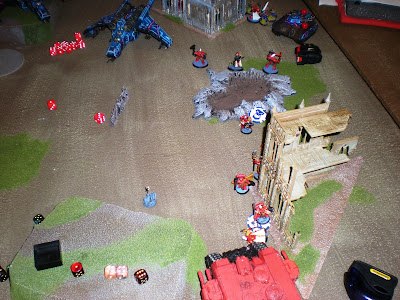 Right side he is moving up:
At the end of Turn #5 the purifiers are holding 2 objectives, and the Strike Squad has one. He has one in the back left in the building and in the forest. I am winning 3 objectives to 2 but the game does not end.


Turn #6
This is the turn where everything goes wrong.
Imperial Guard Turn #6
On the last of his manticore's 4 shots the first one gets 3 shots and he aims for the strke squad. He tits them, flips the template on to the land raider and then back on the strike squad. Well, he blows up the land raider and I fail 4 saves. He takes the last strike out with the Guard squads. On the other side of the table he hits my purifiers and I fail 4 out of 5 armor saves.
The only good news is that Draigo kills the last of the guard squad.
(No picture)
Grey Knight Turn #6
Well the Librarian has to run back and cover the objective that the Purifiers were holding (I screwed up and should have moved him to help out Draigo). My Demon Hammer finally kills the Chimera after 3 rounds buy knocking all of its weapons off and immobilizing it. Draigo charged the Manticore and with 5 attacks at strength 6 needing 4s to glance I roll 5 1s,2s and 3s doing no damage.
Right side 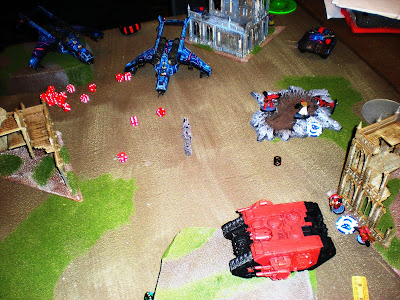 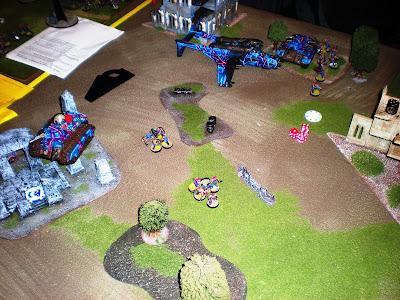 End of the Game
Adding up the objectives my purifiers have one, the librarian has the one in the crater. The paladin with Draigo has the Manticore still alive and contesting that objective.
He has the one in the back left in the building and the back left forest. He also has the one in the bottom left were my strike squad was.
He wins 3 objectives to 2 for a minor win. If it goes one more turn I kill that stupid manticore and the best he can do it tie. Darn, turn 6 he had great shooting to combine with my bad armor saves to help him pull out the win.
Christian had a good army and he went on to win the tournament. I slowed him down, but I could not stop him.
Posted by Blackmoor at 1:55 AM