Setup
I win the dice roll and get to go first!
He has wolf scouts so not only do I have to avoid the sides of the tables, I have to move forward. If he comes on behind me I need to be 12’ from the back table edge (6” Wolf Scout move+6” Melta range) so I have to move 6” a couple of times with my land raiders before he come on in the bottom of turn #2. I start with my power armor in my Land Raiders and the Paladins in one squad. If he wants my Kill points, he is going to have to earn them!
Turn #1
He rolls a “6” and seizes the initiative!
Space Wolf Turn #1

No pictures (I forgot the first few turns)
He shoots up my Paladins with Plasma Cannons which I was unaware of. When I looked over his list I saw long fangs and I assumed that they were missile launchers. Plasma cannons where an unwelcome surprise since I was bunched up, but a bad scatter and an INV save they did not hurt too much.
Grey Knight Turn #1
I do not like those long fangs on the right with the plasma cannons and I shoot them with my paladins and I kill some, but did not kill all of them. My Land Raider on the right kills a rhino.
Turn #2
Space Wolf Turn #2
He just stands back and he does not have that much long range shooting. ML are not going to cut it, and his other LF squad is about to be history.
Grey Knight Turn #2
My shooting kills the Long Fangs with the Plasma, and a rhino on the left. On the right he moved the GH squad from the blown up rhino into a crater on the right, and I move my Land Raider forward and I assault it with my Purifiers. They made quick work out of the grey hunters and hacked them all down with halberds. This might not be a good idea since they are a lot of VPs, and they are unsupported.
Here is the left side of the board. The Long Fangs that were killed where in the building on the upper left. The rhino on the left is wreaked and the squad got out. 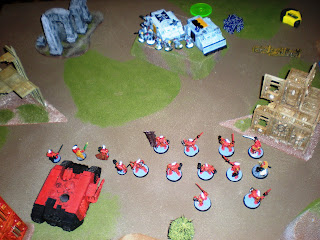 Turn #3
Space Wolf Turn #3
The Space Wolf Scouts come on to my right table edge (I think he wanted them on the left) and he surrounds my purifiers.
Here is a shot at the right side of the table after his movement: 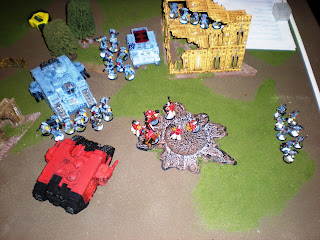 He shoots at them with the scouts, the long fangs (in the building above them), and one of the grey hunters and they kill all of them except for a psycannon gunner. He also pops a melta gun shot at my land raider and fails to penetrate. He might not have rapid-fired so much so he could assault whatever was left, but Space Wolves are use to double-tapping and taking the charge with counter-attack.
Grey Knight Turn #3
It is getting too hot for my last purifier and he jumps in my land raider and gets the heck out of there! 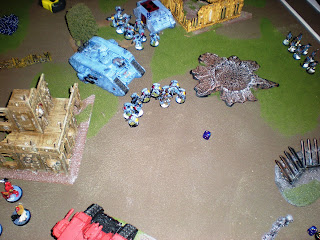 The other side of the table I am slowly advancing 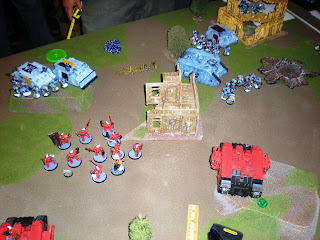 Turn #4
Space Wolf Turn #4
He chases after my land raider and pops a shot but he is now out of 6" and doesn't do anything. He loads up his Land Raider with a Grey Hunter squad and surrounds my Paladins.Shooting at them just makes them angry.
Grey Knight Turn #4
I move forward because I have him where I want him now.... 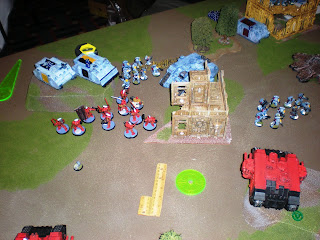 So I multi-charge the Land Raider, the Grey Hunters and a Rhino.
Afterwards he just has a squad where his Land Raider use to be. 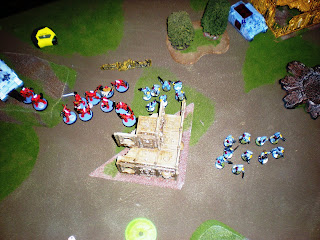 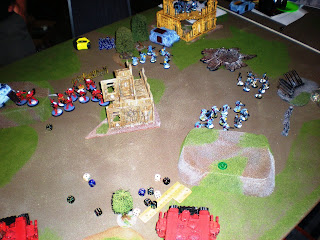 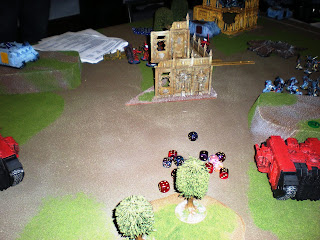 Mercifully the game was over after turn 5.
I did not lose any units, and my Paladins went through him like a hot knife through butter.
The funny thing is after this game I was thinking that not one can stop my paladin squad and they will just walk over everyone. That notion was gone quickly after my tabling by necrons in the next game...
Posted by Blackmoor at 9:41 PM