So after my massacre what army do I get paired up with? IG? Blood Angels? Another Space Wolf?
Nope, I get Necrons!

Mission: Mark the Graves
There are 2 buildings in the center of the table quarters that we are not deploying from, and one in the center of the table. At the end of each game turn you hold a side building you gain one point, and if you hold the center you score 2 points.
Well, this is fortunate! There is no way that my opponent can get into the buildings and contest them from me. Not unless he wants to phase out.
Deployment:
L-Shaped deployment (Table Quarters 12” in)
Setup:
I win the dice roll to go first and I give it to my opponent. This mission is all about holding objectives at the end of the game turn. 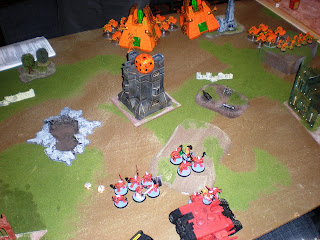 He sets up with the monoliths in the front, and the destroyers in the rear. He keeps one Warrior Squad in reserve.

Turn #1
Necron Turn #1
He moves forward and pops some shots at my paladins and does not do much of course. 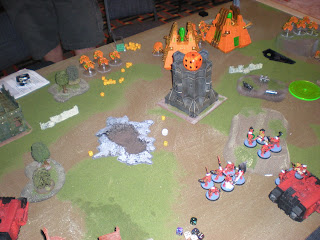 Grey Knight Turn #1
I spread out because I do not want to eat a particle whip, This mission is about holding buildings so on the left I move the Land Raider forward and unload my Purifiers into the objective building on the left. My shooting takes down one destroyer and a couple of warriors. 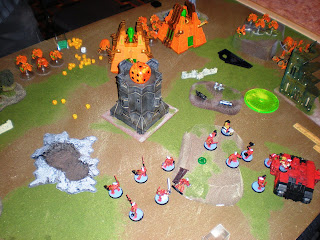 End of Turn #1
Grey Knights 1
Necrons 0
Turn #2
Necron Turn #2
They move forward some more and gets his warriors into the building on the right. His destroyer shooting does some wounds to the Paladins and the particle whips (Or is it Flux Archs?) kills my Land Raider on the right.
(No pic)
Grey Knight Turn #2
The loss of the Land Raider hurts. I was planning on assaulting the warriors with my strike squad so now all I can do is run them into the building on the right to contest his owning of the building. The paladins hit his monolith with 4, strength 10 demonhammer attacks and don't so anything. 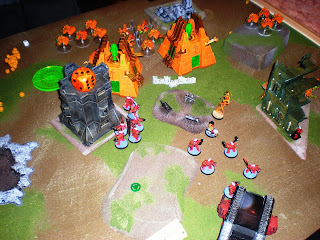 Bottom of Turn #2
Grey Knights 2
Necrons 0
Turn #3
Necron Turn #3
He shoots down my strike squad in the building. His other shooting shoots down 5 Purifiers.  Here is where it gets ugly. He assaults my Paladins with the Deceiver. I pop off a sanctuary so I get to strike first. The Librarian casts hammerhand so I can use the paladins power to force weapon him. I hit him 4 times and I get 2 "6's"!!! He rolls his saves and makes 2, 4+ inv. saves! Argh! Now on his turn he swings with his 5 attacks and hits 5 times. Then he wounds 4 times and he is strength 8 and ignores all saves dropping 4 paladins.
(No Pics)
Grey Knight Turn #3
My last 2 purifiers jump into the land raider for protection. Draigo comes out to help the Librarian and the Deceiver jumps out of combat.  I whiff on the Monolith again with the Demonhammer. 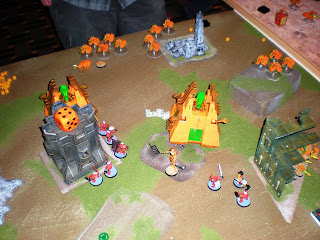 Turn #4
Necron Turn #4
He gets his squad of warriors on and moves up to the building on the left that the Purifiers are holding. He shoots at the Land Raider and knocks a gun off and shakes it. His shooting and the assault by the deceiver kills Draigo, the Librarian, and last paladin.
(No picture)
Grey Knight Turn #4
Well, I am down to 2 Purifiers, a Land Raider and a few Paladins. The good news is that I finally kill the Monolith giving me the center building! The purifiers get out of the land raider so I can assault the warriors. I move the Land Raider around so that it screens the Purifiers from the Destroyers fire after they wipe out the warriors. Of course I roll a '1' and the Land Raider gets immobilized. I pop off a Hammerhand and with 6 attacks and kill one warrior. His attacks back don't do anything and he makes his moral role. (Let's see, 6 attacks, 3 should hit, 2 dead necrons grrr). 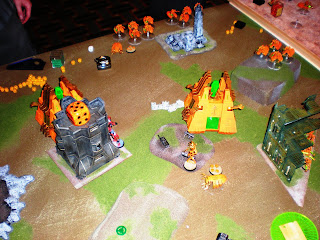 A close up of the purifier battle from my opponent's side of the table. 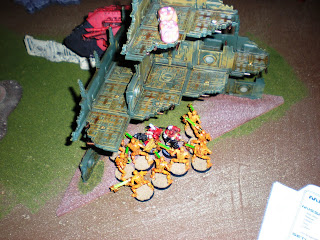 Turn #5
Necron Turn #5
His Deceiver assaults what is left of my paladins and kills them except for the demonhammer and he hits, wounds, and he fails his save and gets force-weaponed. Then he explodes and kills the last paladin. :(  In the purifier combat I try to get off another hammerhand and roll a '12' and I lose the Knight of the Flame to Perils of the Warp. 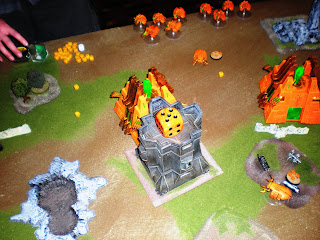 Grey Knight Turn #5
Since I am down to only one Purifier I try to cast Cleansing Flame and a roll a '2' and lose the last purifier to PotW.

Turn #6
Necron Turn #6
He shoots at my Land Raider and knocks off another Lascannon,
Grey Knight Turn #6
I do not see much point in shooting my Heavy Bolter


Game End
I barely survive with a half dead Land Raider


Well that was an ugly win. That deceiver is a bad mofo and is perfect for paladin killing. Here is the problem, the mission was to run up and hold buildings. If I went all out and just held the buildings I would have gotten a even larger lead, and the deceiver could have only killed one Paladin squad. As it was, there was no way that he could have won (except by tabling me which he almost did).

I hate these kinds of missions. Really it was a no-win scenario for him which is no fun for me, and worse for him. I know what this feels like because I played against Dash of Pepper in a scenario that I could not win in last years Slaughter in Space.


There was a Tau player at this tournament, I wonder how he did at this mission?